An Ancient Bahmani Monument
by
Prof. Bibhudutta Baral and Srikanth B.
NID, Bengaluru

Bidar is a city in the Indian State of Karnataka, named after Bamboo, locally called “Bidiru”. Bidar city is regarded for its ancient forts and handicraft products. The city, the district, and the fort are all tagged with the name Bidar. The Bidar Fort built in 1426-32 AD by Bahmani King Sultan Ahmad Shah, is considered the most difficult trek in the country. The fort is surrounded by a rare to find triple moat, introduced by Turkish Mercenaries. Other notable structures include its seven well-protected gateways, two main gates to the palace complex, and several elegant monuments within it. The Sharza Darwaza and the Gumbad Darwaza, are the massive complex gates that open to the southern side, enhanced with domes, arches and paintings. The passage area between these gateways possesses the capacity to accommodate three thousand soldiers on duty to shield the fort. Mandu Darwaza is another brilliantly designed gate that opens to a well-defended underground tunnel, protected by 37 bastions, huge cannons, and large weapon magazines. Other architecturally diverse and outstanding monuments within the fort are Takht Mahal, Turkish Mahal, Rangeen Mahal, Gagan Mahal, Shahi Matbakh (Royal Kitchen), Diwani-i-Am (Public Audience Hall), Solah Khamba Mosque and the Naubat Khana.

Rangeen Mahal, the best-preserved monument in Bidar Fort is an architectural wonder. It is also named as Queen Palace as the Queen and her women staff were the main residents of the Palace. Like Gagan Mahal, Rangeen Mahal was also rebuilt during the Barid Shahi period. This masterpiece from the mid-16th Century stands out for its wall decorations with finest pearls and colored tiles arranged in jet-black stone. Floral Paintings, Calligraphy Texts, Stone carvings, and Stucco art are other highlights of the structure. 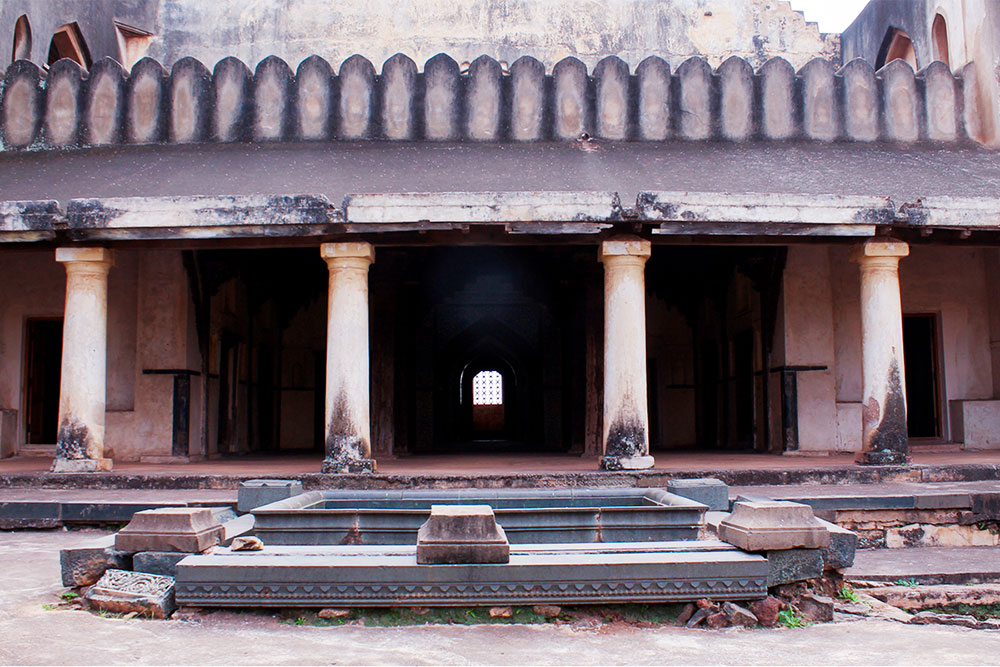 Front view of the Rangeen Mahal. 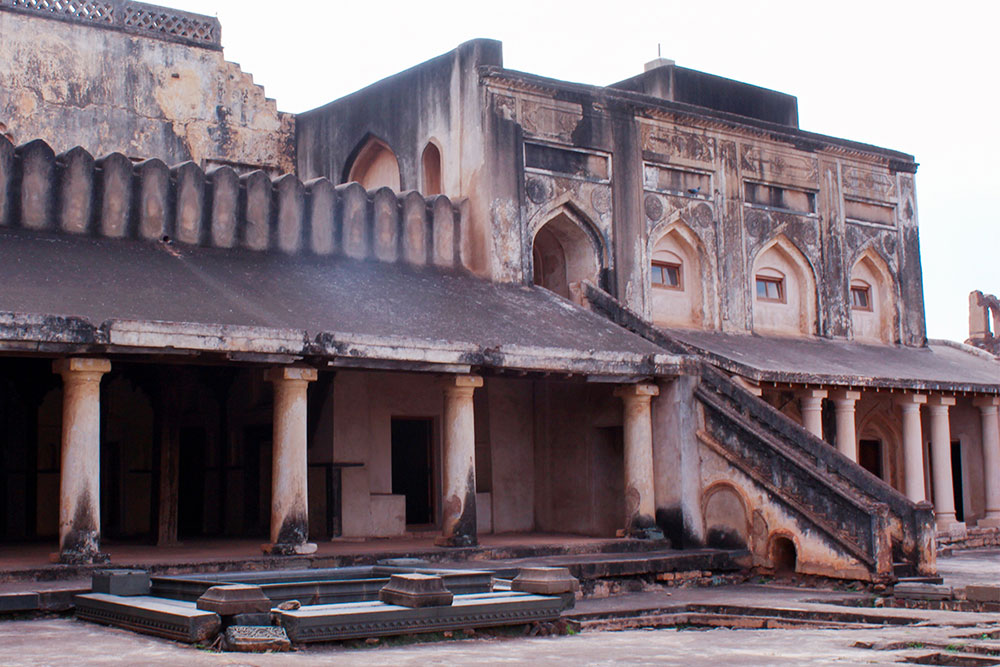 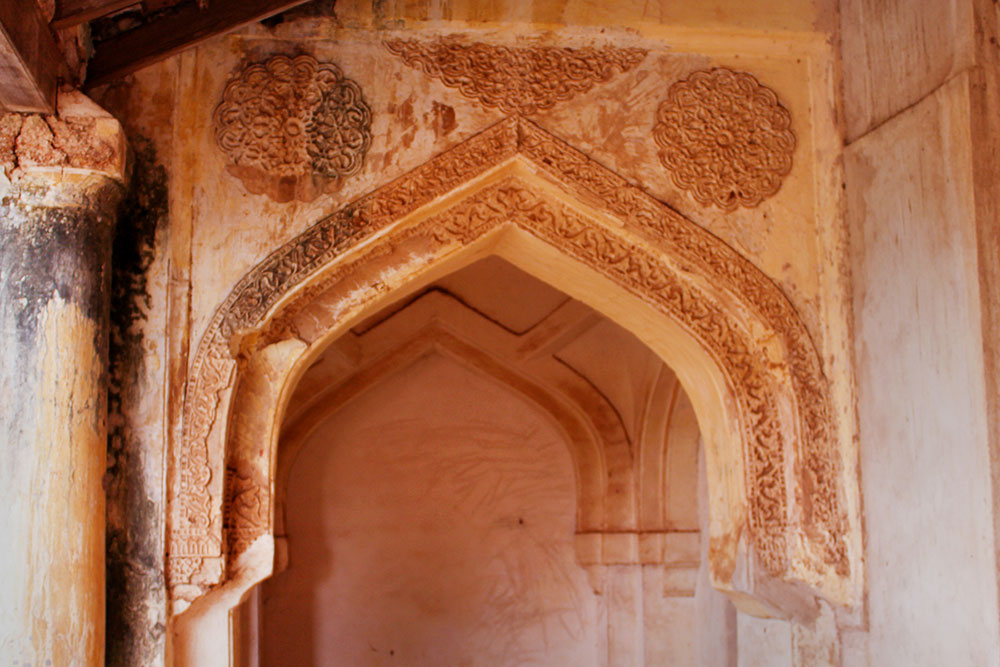 Mural Located on the arch-shaped door. 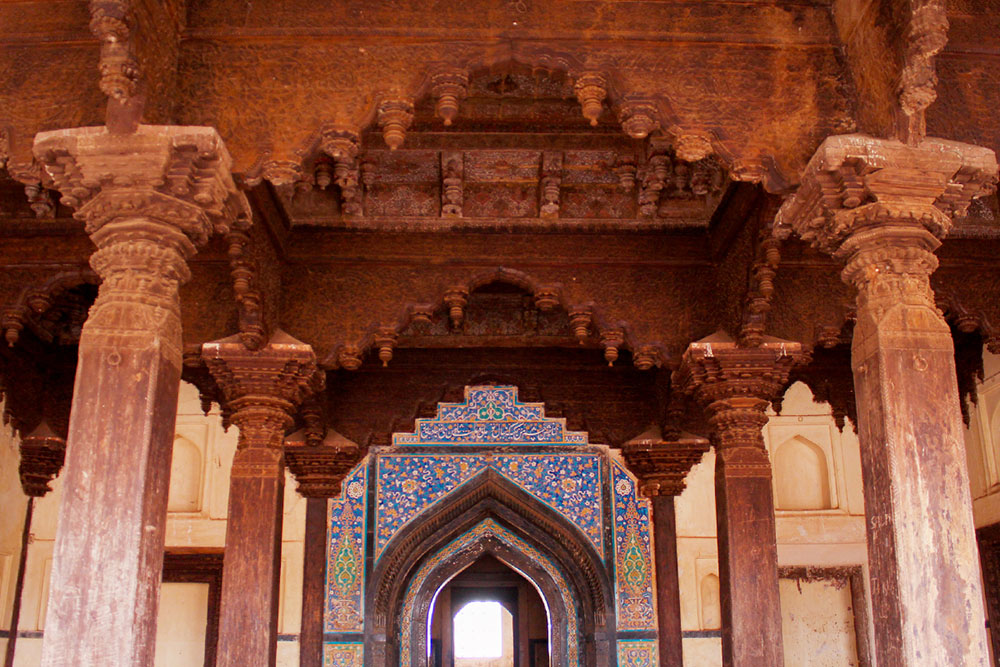 Inside view of the Rangeen Mahal. 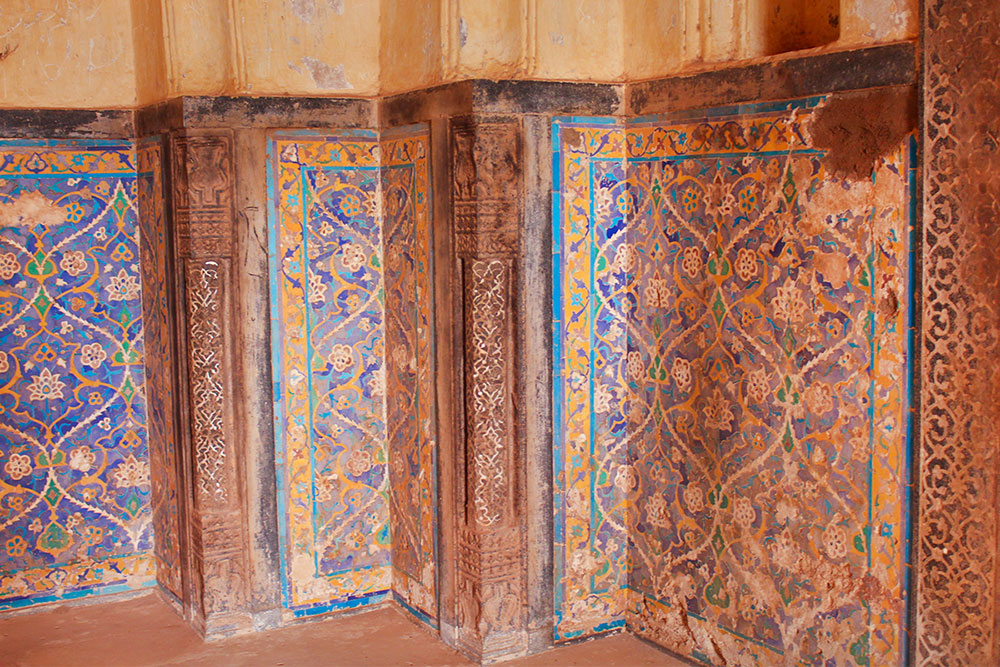 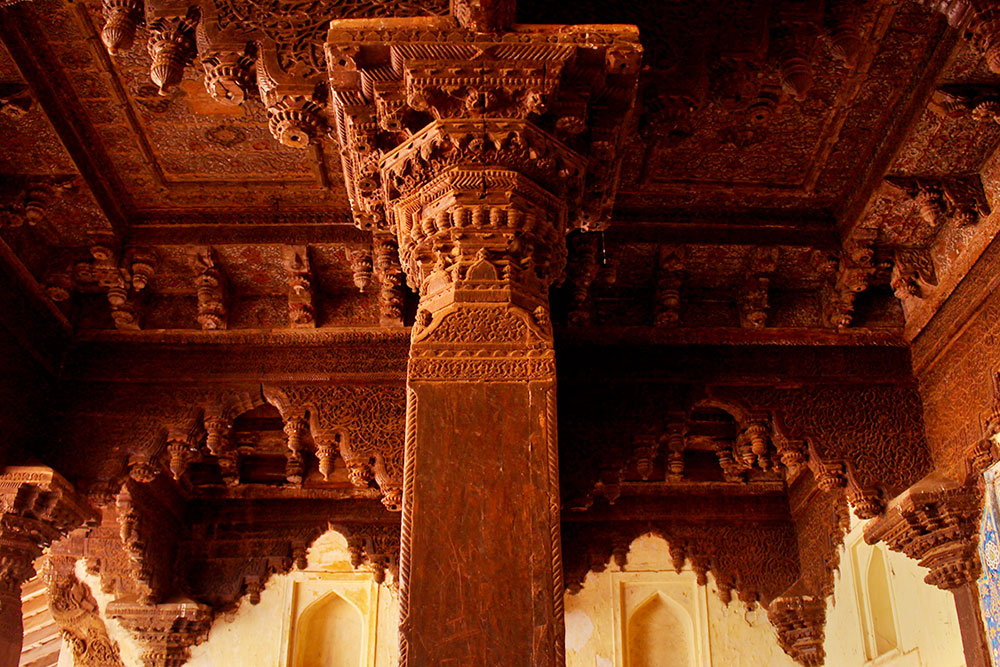 Wooden roof carved in the style of Islamic architecture. 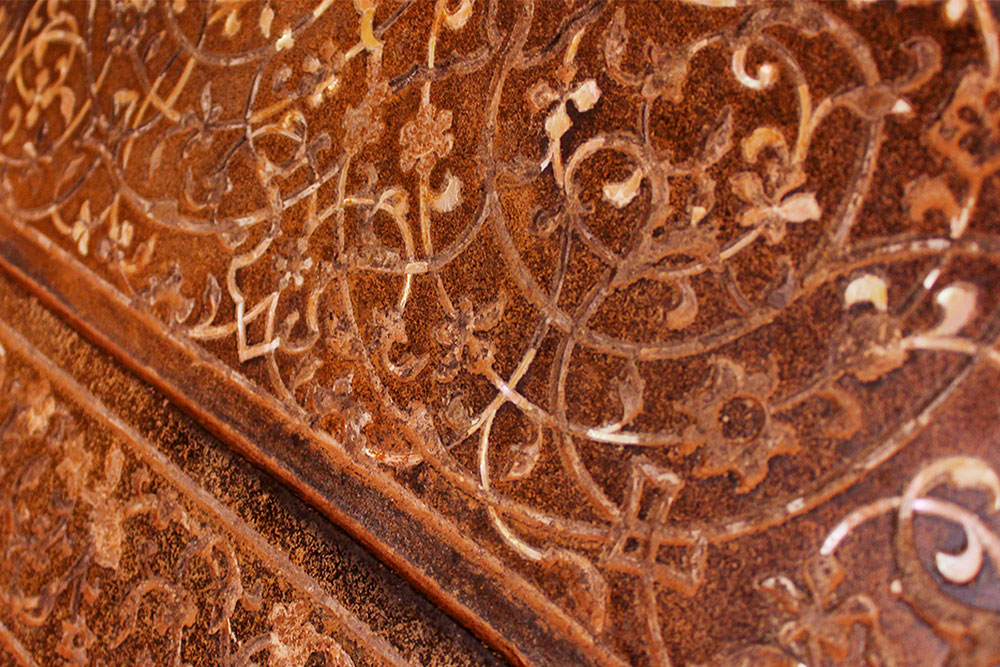 Closer view of the Inlay work at the Rangeen Mahal. 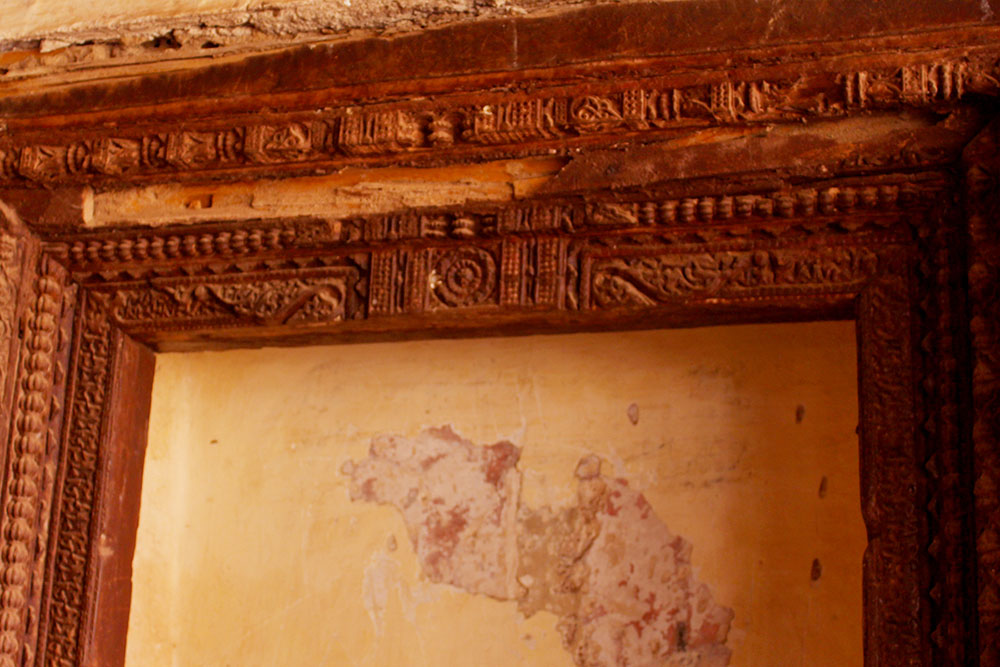 The wooden frame of the Mahal door. 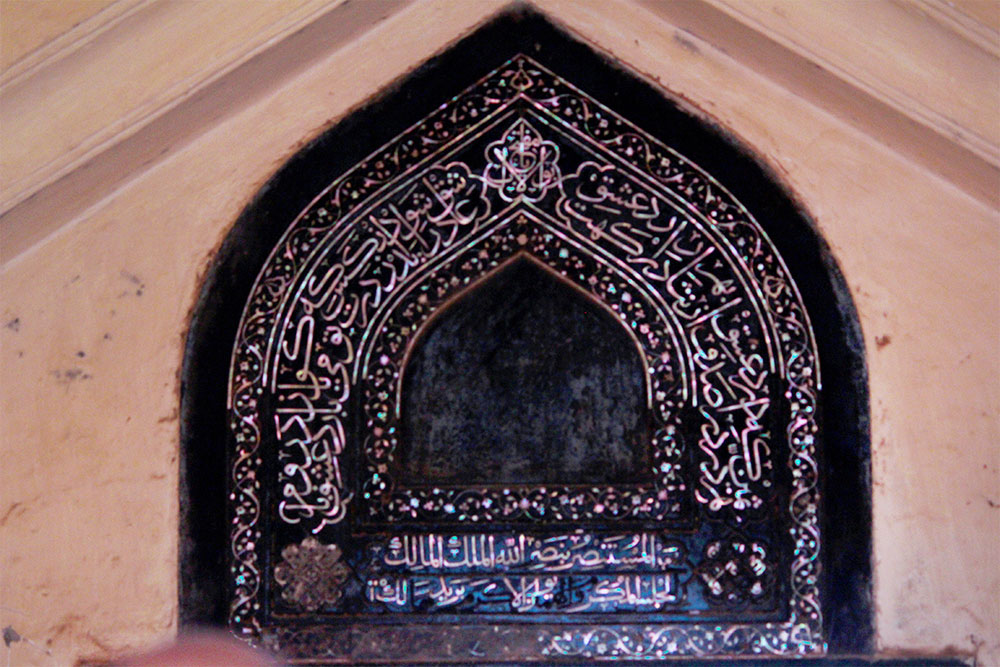 Islamic writing on the wooden inlay of the door arch. 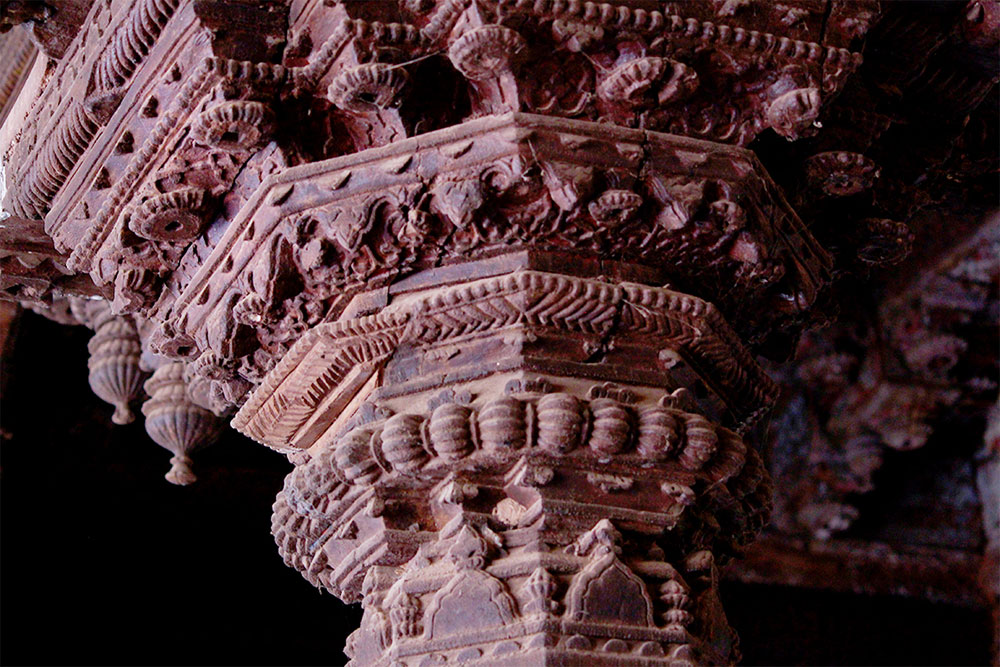 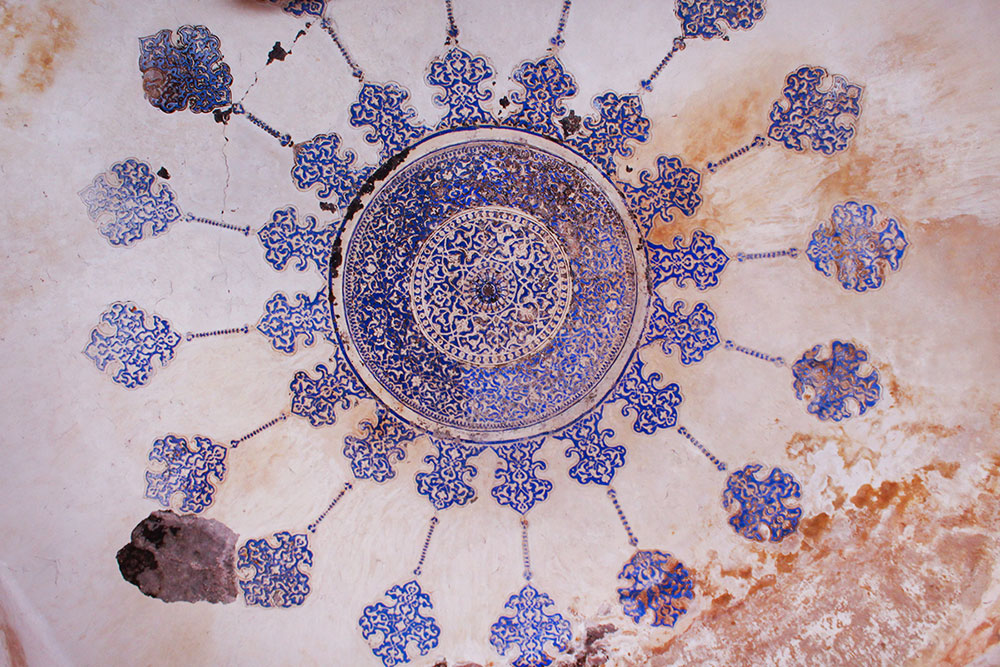 Mural art on the roof of the Rangeen Mahal. 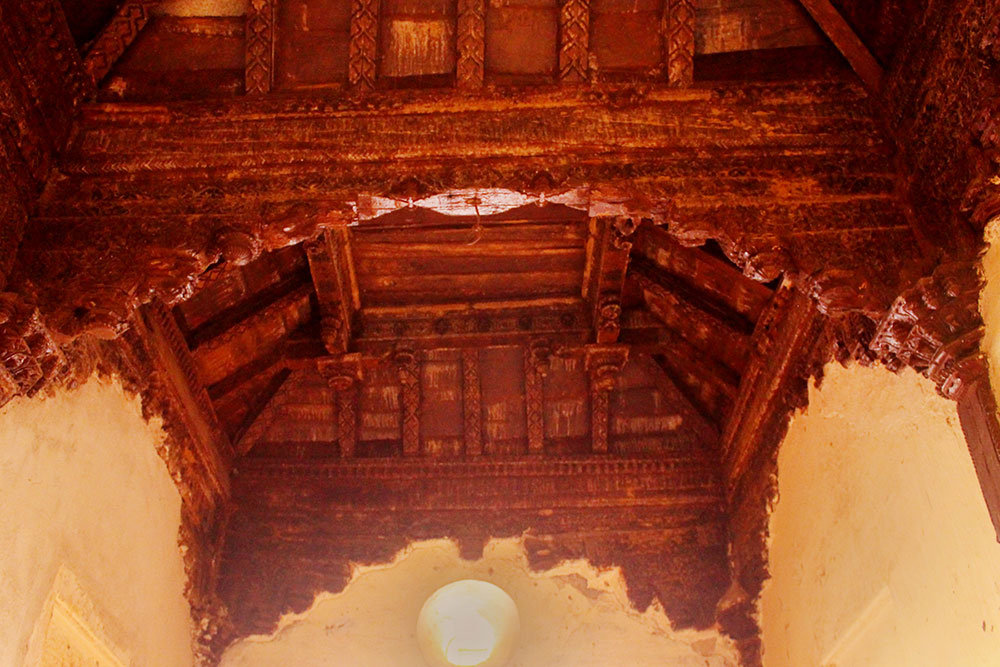