Filigree is an attractive type of work used in silver jewellery making. Among the important centres are Cuttack in Orissa and Karim Nagar in Andhra Pradesh. As twisted silver wire is the base material, the articles have a lacy trellis-like appearance. Cuttack has been famous for its spider web work and the filigree work is locally known as Tarkashi. It produces very exquisitely patterned jewellery pieces. The rose flower dominates the design in the Cuttack region and most of the designs are built up around flowers. In Karim Nagar, creepers and leaves predominate. They have a unique method for fixing firmly, the numerous components. The craftsmen, who belong to the Sunar, (goldsmith) community of Orissa, practise the craft which was introduced in the state during Mughal rule. Thick silver wires are used to make the frame into which small design pieces (sikko) made from thinner wires are fitted. The craftsmanship lies in fitting the small parts perfectly in the frame. Decorative and elaborate motifs influenced by the Mughal era have inspired the intricate designs produced by the craftsmen. They make jewellery and decorative figures like idols of gods, animals and replicas of the Konark wheel and the TajMahal. The process includes wire being drawn and then pressed in different shapes. The smaller articles are directly moulded into various designs. For larger ones, smaller components are made and pieced together. Traditional jewellery items made by this art form include arm jewellery, necklaces, nose rings and the anklets. Modern jewellers also make brooches, earrings, pendant, hair pins, and bangles along with other utility items like trays, plates, cups, bowls, ash-trays, candle stands, incense containers, vermilion containers, animals, birds, flowers, peacock, chariots and even ladies bags. Filigree work of Orissa is an example of a great artistic excellence which is rarely found in India. Thin silver wires are carefully shaped and made into intricate designs. Fine strings of silver threads are produced by drawing it through a series of consecutive holes of very small diameter. These wires are then heated and wound around a charkha, and then later fastened together. These threads are then shaped into various designs and patterns. Filigree is thus a combination of different pieces joint together. Cuttack is the hub of silver filigree locally known as Tarkasijewelry attracting people from all over the world. Various products are made out of Filigree such as Plates, bowls, cups, trays, necklaces, bracelets, and many others. The motifs frequently used are peacock, birds, flowers, leaves and many more. 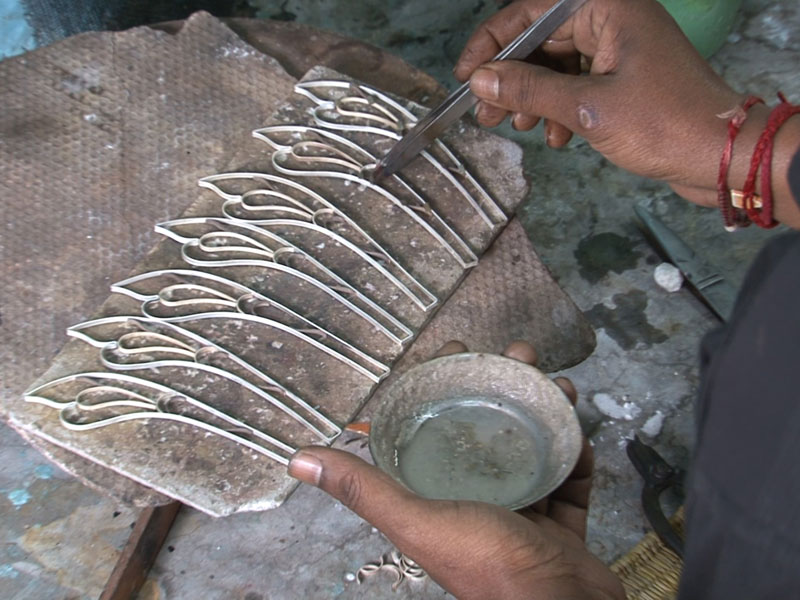 Thick silver wires are used to make the frame into which small design pieces (sikko) are fitted. 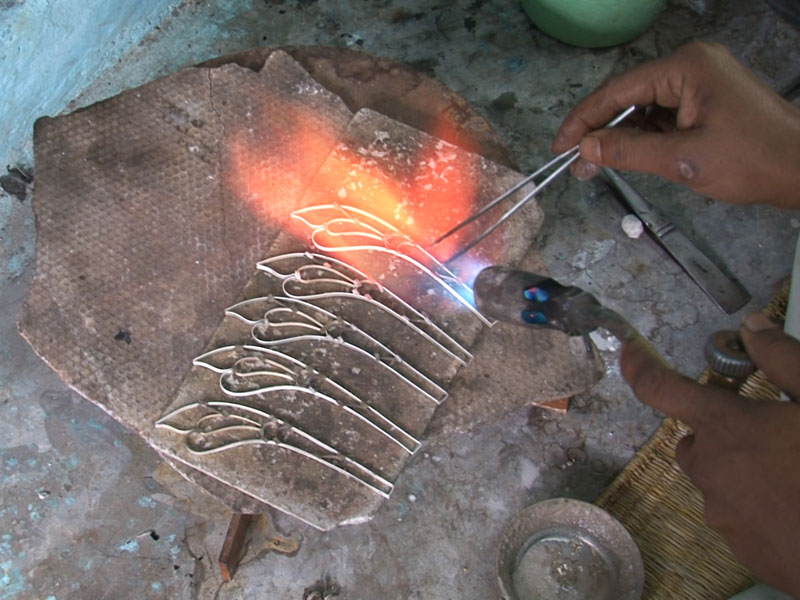 The frame is annealed using heat from a blow torch to add strength to the structure. 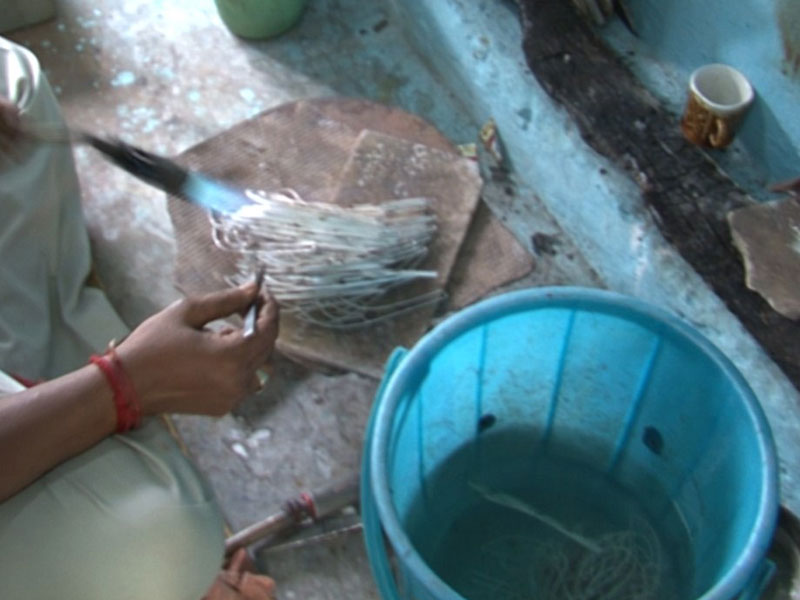 Immediate cooling ensures the consolidation and strength of the structure. 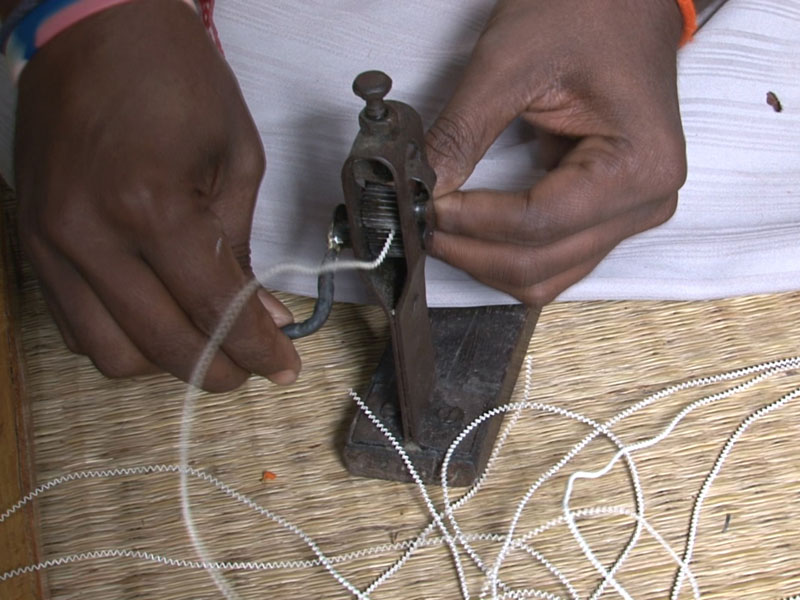 A machine is used to impart a zigzag appearance to the straight silver wire. 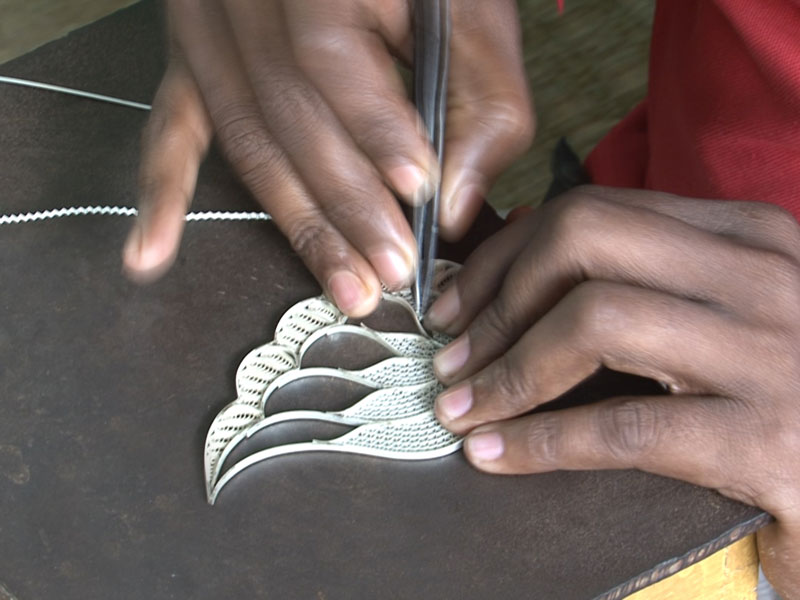 The wire is manipulated in the frame to depict the designs. 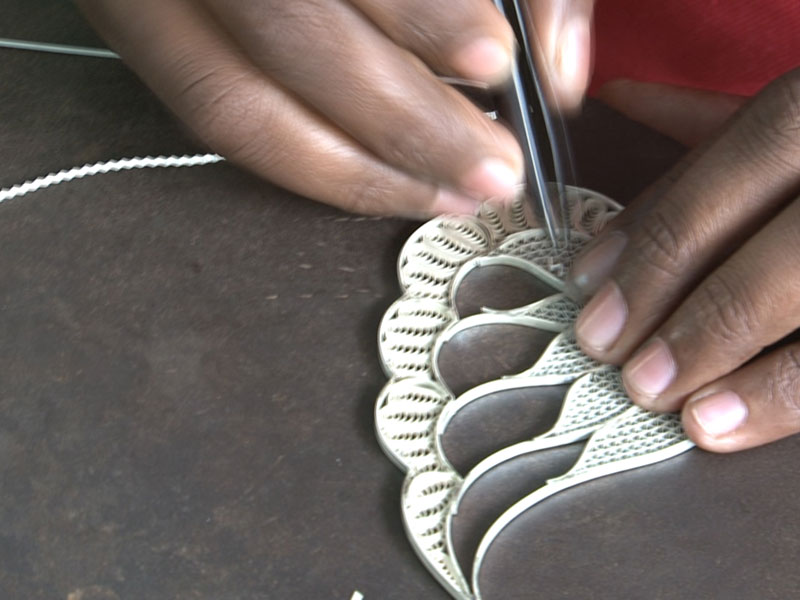 The wire is filled inside the frame one curve at a time. 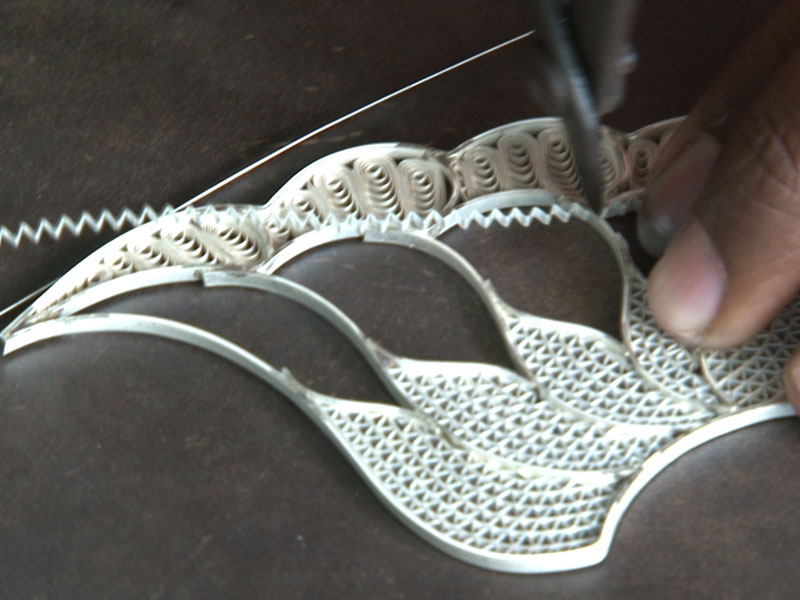 Pliers and cutters are used to fix the wires inside the frame. 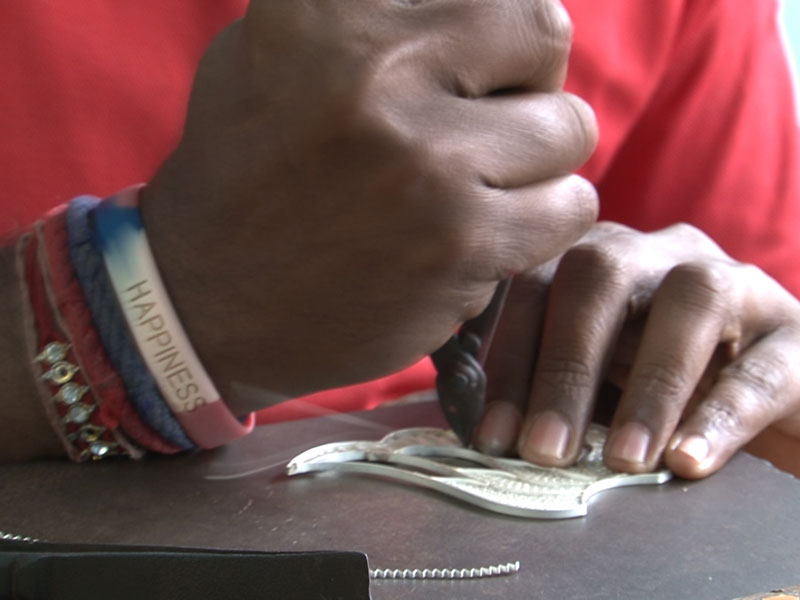 Once an area is filled with the wire, it is cut and the next area is taken up. 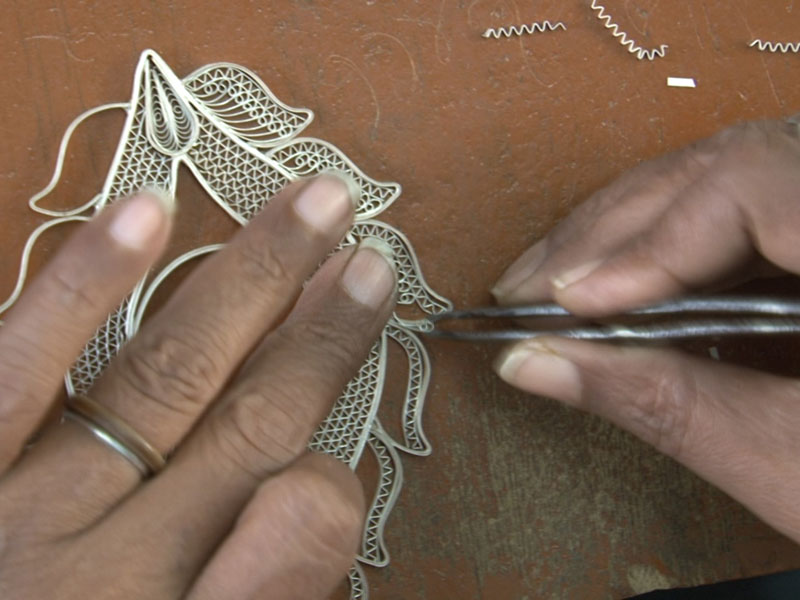 A tweezer is used to manipulate it around the curve. 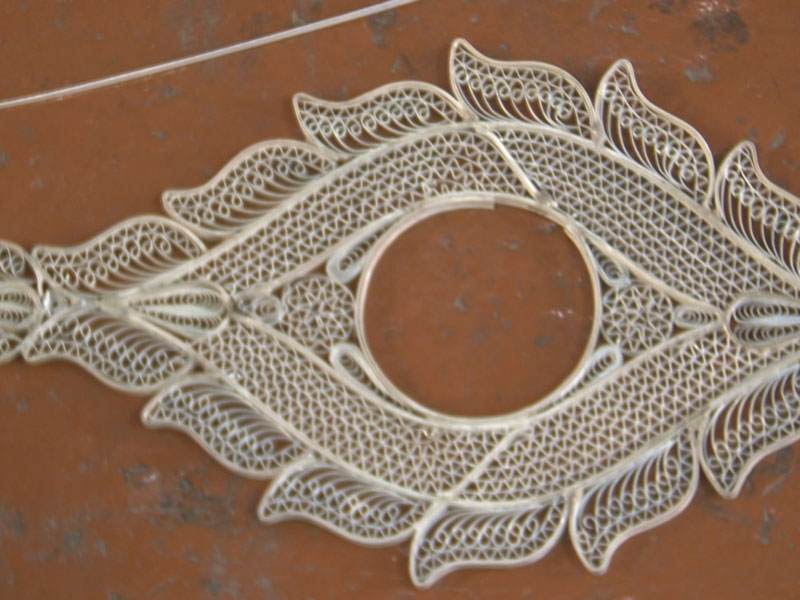 After the wire is fixed, it is beaten in to the structure to fit compactly. 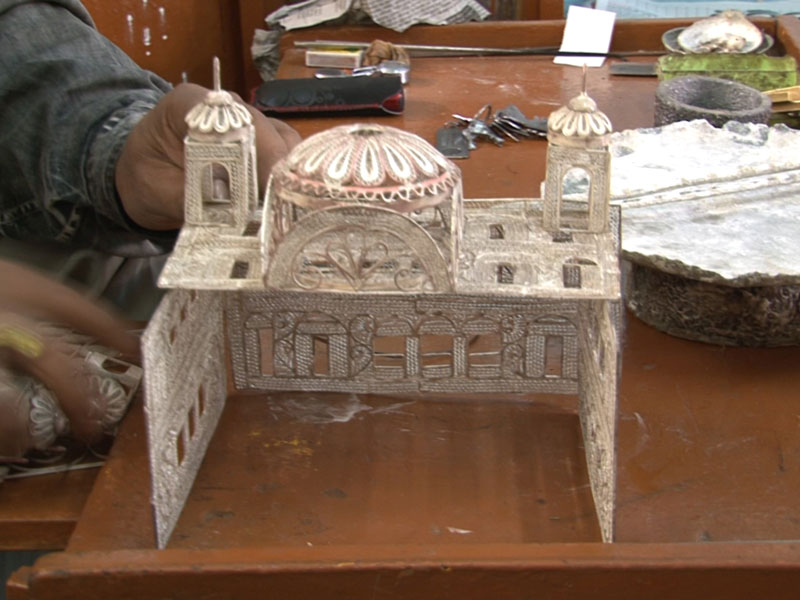 The different components are crafted individually and placed together, a masterpiece of the filigree craft. 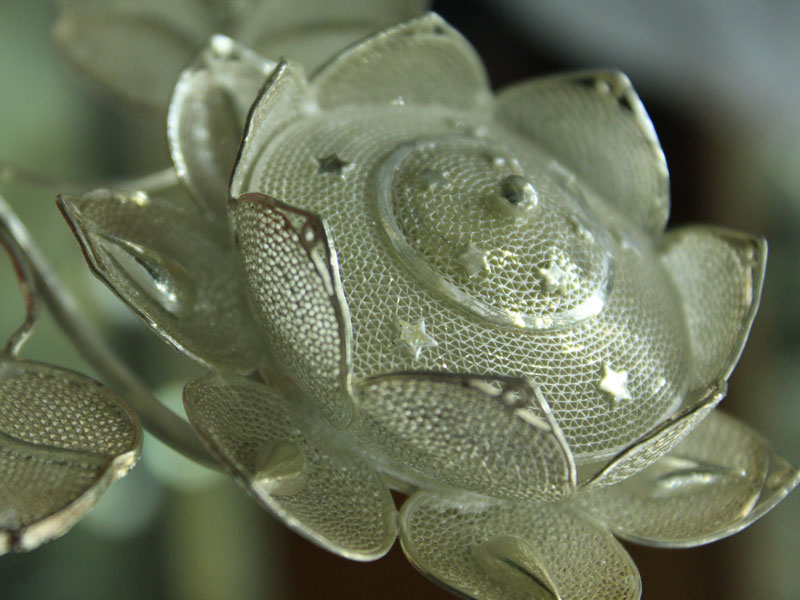 The intricate and exquisite skill is characteristic of this craft.