• Born in 1944 into a joint family of a farmer in Gunnathota Valasa, a tiny Agraharam (a village gifted to a
scholar by the king) in Andhra Pradesh, South India

• He was captivated by the songs and storytelling events put up during festivals, with a special attraction
to Tholu Bommalata, a shadow puppet theatre tradition of the state.

• He tried recreating the work with paper to put on shows for the children of his neighborhood.

• He has said he owes his life to his teacher, Varahagiri Veni Madhavarao, without whom he would have
been like most children in his village - without education and tied to life in the fields.

• He started out his professional career as a signboard painter and then became a mechanical engineer,
then finally settling down to practice and teach design.

• He went on to complete his diploma in Mechanical Engineering and was employed at JK Paper Mills.

• He then joined the National Institute of Design when a friend pointed out an opportunity for him.

• He was able to get an opportunity to go to the Royal College of Art, London, and was fortunate to work
with people like Misha Black and Bruce Archer.

• He has had varied pursuits such as short story writing, package designing, and even film criticism.

• He is an industrial designer, senior faculty and former Chairman of Education at the National Institute of
Design  in India.

• He is a founding and governing council member of The Craft Development Institute in Kashmir and is
currently the Dean of DJ Academy of Design in Coimbatore.

• He is the Emeritus Professor of CEPT University, India.

• He is married to a Textile Designer, Padmini Tolat, and has two children.

• He has held various senior positions such as Chairman of Extension Programs, Co-ordinator, Foundation
Programme, Associate Chairman, Industrial Design, etc., at the National Institute of Design. He is
presently Governing Council Member of The Centre for Environmental Planning and Technology; Vice
President of The Society of Industrial Designers of India and Co-ordinator, Design Foundation Studies,
NID. He was even a part of the advisory board of ‘Design Issues’, a journal of international repute.

• He has been involved in many projects over his many years of service to the design industry. Over the
years, he has taken part in projects like the Bicycle as a project at the RCA to address the need for a
personal vehicle in India that was affordable and comfortable; some early projects of the Bullock-cart and
other harvesting implements; revolutionised architecture for the common man with the heightened use
of Indian Aesthetics. He was even criticised by the well-known writer, V.S, Naipaul for the use of
harvesting blades in a foot-worn implement but was greatly appreciated for his design of the wheelchair.
He even worked with his team on the life-saving oxygenator for the Sri Chitra Tirunal Institute of Medical
Sciences and Technology, which was awarded India’s prestigious National Meritorious Invention Award.
He is an internationally reputed designer with four patents to his credit. The life-saving equipment he
designed jointly with a colleague for the Sri Chitra Tirunal Institute of Medical Sciences and Technology
received India's prestigious National Meritorious Invention Award. His varied pursuits include short story
writing, package design, and film criticism. 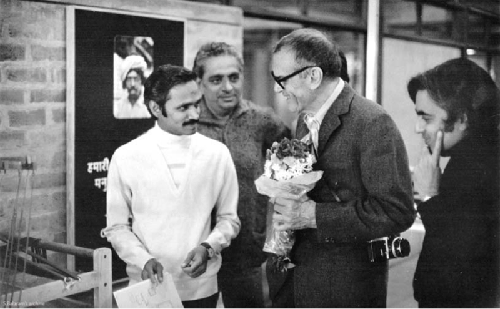