"I got to know RK (as he was known) when I was a student at the Industrial Design Center, at IIT Mumbai. I came to IDC with interest in educational cinema with little knowledge and even less interest in typography. In fact, during the admissions interview, RK asking me to identify a typeface I had used in a poster, and I failed to do so. You can gauge the level of my ignorance by the fact that that type I could not name was Helvetica! One class with RK changed all that. Type came alive in his hands, and his passion was infectious. It wasn’t that I knew much more at the end of the semester, but now I knew what I didn’t know. And what a wonderful world I had been missing out on. RK taught me to love typefaces, their bowls and curves, quirks and instabilities, individual characteristics and personalities, their rules and their inherent lawlessness. He taught me how media influence meaning, how Indian scripts, meant to be scratched into palm-leaves, were destroyed by the standard typewriter and then came back to life in the digital world. This passion with type, their shapes and meanings, stays with me to this day."
Punya Mishra

"He was one of the rare contemporary designers deeply rooted in culture and tradition. Whilst all of us struggle to understand the contemporary interpretation of Indian tradition, and he made it look as easy. He was one rare designer who transcended design and art with ease."
Unmesh Kulkarni

"He has been an inspiring guru for his passion and total lifelong dedication to typography, which he loved so much. I had the privilege to be his assistant for a very short period soon after my graduation and we made a trip together to Delhi to present the logo for the post office to the minister. That had been quite an experience to see how RK built a rapport with the senior managers at postal department and delicately handled the interaction with the minister with such humility. The minister actually took a pen and start making changes to RK's logo! Whenever I see the logo on the postboxes, it always brings a smile to my face. It is exactly as RK designed."
Raghu Kolli

"I remember him sharing his exhaustive research and documentation to guide the Indian language Text-to-speech technology development at C-DAC. It was amazing and inspiring to watch him work at his age, with the same intensity, despite going through the bi-pass heart surgery.

Some memories that I cherish...

During my IDC days- I remember him telling me, as my guide, enough of animating birds and animals, Walt Disney has done that well; why not animate the letterforms? That one line set a new direction for my project. I ended up animating a story of Devanagari letters.

R K has been an inspiration to many generations of designers. He will always be remembered for his profound contributions to typography."
Dinesh Khatre

"I still remember his words in Marathi 'Ek akshar lihava, ek tap thambava' (Write one letter and wait for ages before writing the next one) during a workshop with our batch in 1999."
Rugwed Despande

"My association starts with R K since his 'ULKA' days. RK my guide, my teacher and my friend, has inspired numerous designers, design students and art lovers to make this world a better place to live.

His powerful demonstrations on Calligraphy and talks on Indian scripts and typography are always mesmerising."
S K Mohanty

"When I talk to him over the phone, he used to tell me his plan of experiments for another ten years and I used to feel ashamed of myself for not having a plan for a good thing even for next week. He has engaged in his ideas and thoughts always. He was a great teacher and a very good human being who is so influential. I thank him for the light he had spread on my way and his valuable guidance....and pray for him."
Rajith Kumar

"I find myself lucky to be taught by him in IDC. I remember those days when he opened up a new world in front of me- a beautiful world full of letterforms. He used to talk very passionately about letterforms...and all of us used to wonder when he used to bring old copies of U&Lc Magazine to the class and talk animatedly about various fonts.... oh! look at that lowercase r of Rockwell.....a of charter.........G of ITC veljovic........that "O" of poster Bodoni............. It went on and on."
G V Sreekumar 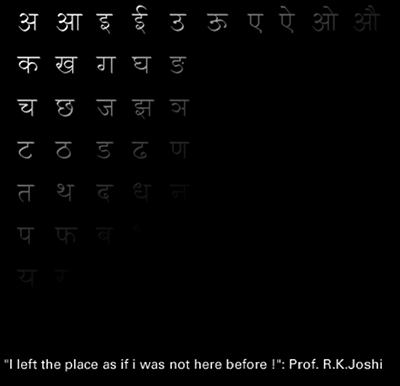