Fiction biography films are inspired by reality. But to study the reality and combine it with a the fictional story needs to bring justice to the real characters and the exponent. How Ethnography study can affect the editing of a documentary and how the information can be used to inspire the script of a fiction film and these factors can lead to a conventional film or maybe a completely experimental one. The subject here supports the idea of feminism but in an unusual way. It is an experiment to let society see a very common idea of feminism through a very uncommon example of “A lady being a cremator” by Gulaab Tiwari.

We are living in a country where the struggle for women is real and that struggle is being continuously supported by a number of feminist movements, be it an advertisement, campaigns, films and whatnot. Many of these ideas and campaigns are based on the idea of a woman breaking all the restrictions of society, religion and cultural norms and mostly these women are part of a big achievement or they have achieved something that a normal person can only dream of.

We came across a personality named “ Gulaab Tiwari “ who has put an example of women empowerment in an unusual way or at least I think it an unusual way and that's what attracted me to explore this idea in depth which later took me to Rasoolabad Ghaat, Allahabad.

Life and death revolve around our protagonist, so I decided to study what Hinduism has to say about life and death and this study was- both towards the understanding of what your Vedas said and how our society and an individual look towards it.

Sylvia Vatuk did research on ageing in India and how the concept of death is taken especially in old age. She found out then in Hinduism the concept of death is treated positively as compared to other religions and societies. The acceptance of death is very common in India which again came from the fact that the Hindu religion teaches certain concepts where death never seems to be the ultimate end rather it is being celebrated and it's mostly followed by rebirth. Death may be the ultimate end but supported by religion it becomes something which is easy to accept.

Samsara, in simple words, is the cycle of death and rebirth and every being from humans to an insect is part of this cycle. Only the body is mortal but the soul (Ataman) is eternal and after death, it separates from the body and is reborn in the form of another living being. And the ultimate goal of the soul is to escape this cycle of death and rebirth and to attain “Moksha” and become part of the soul. Now the progress towards achieving “Moksha” depends on how living beings live their day-to-day life. Generally, they believe that good deeds lead toward Moksha and this principle is “karma” (action). Good actions lead towards “Punya” and speed up one’s soul towards the release and bad action leads towards Paap (sin) and it will deviate from the liberation. Good deeds lead to a happy life and bad deeds lead to a life of suffering.

And it is also believed that with good karma, one is reborn towards a higher or a better life or maybe in a family with a higher social status whereas bad deeds might even end up getting reborn in a form of an animal or insect.

• Of Life and Death

This documentary was directed by K Bikram. The concept of life and death is explored from the perspective of Maharajin Bua. She is being introduced here as a protagonist but followed by death.

Director has tried to understand how a cremator and especially a lady cremator think of death. Does a lady with death as a companion in her life is ready to accept her own death? To Gulaab Tiwari answers that if you are born then you have to go. death is the reality and everything is in this birth. She doesn't believe in the idea of rebirth too. In this documentary, Bua’s daily life and her work are also shown and her younger son Jagdish is also introduced.

The main idea of the documentary is supported by the conversation between Nachkita and Yamaraj. When Yamaraj explains that life without death has no meaning. Its death gives value to life and it's inevitable. Through this documentary, we got to know how Maharajin Bua is, how she talks, how she thinks and what is her perspective towards her work and it feels that she is what she is, regardless of being in front of a camera, she remains herself. 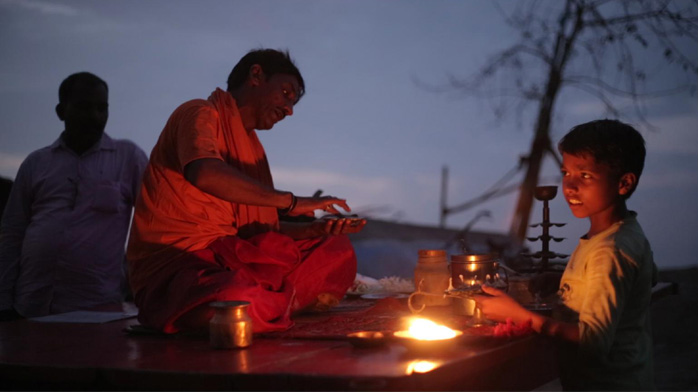