The embroidery is done on a piece of cloth, and size depends on the design being chosen. The cloth is usually poplin, which is readily available in the market. Poplin, also called tabinet is a strong fabric in a plain weave of any fiber or blend, with crosswise ribs that typically give a corded surface. The artisan takes the required size of cloth and places carbon paper on it. Above the carbon paper, a sheet containing various floral designs is kept and traced on the pattern. After completing the above process, the sheets are removed, and the fabric is secured on the embroidery hoop to start embroidery. The type of stitch used here is Trellis stitch. This kind of stitch comes under the Cross Stitch category. Cross-stitches in embroidery include a number of related stitches in which the thread is sewn in an x or + shape. Cross-stitch has been called "probably the most widely used stitch of all. Initially, by using a backstitch, the shape to be embroidered is outlined. Starting from one end of the shape, the needle is passed underneath the backstitch present and pulled over, allowing the thread to pass inside the loop of the working thread and is pulled over.

Similarly, the needle is again passed underneath the next backstitch letting inside the loop and pulled through to form a knot. On repeating the same, one can see the bridge of thread forming during the process, which is used to build the next row of bridges, as one completes that row. The needle is passed down through the cloth and coming up again to start over to end the row. To start the next row, a needle is passed between the gap represent in-between two loops, and by passing through the working thread and it is pulled out.  By doing so, another bridge of thread is formed. The entire shape is filled in a similar manner of stitching.  One can notice a small pouch-like gap formed during the process. Inside this gap, a dab of cotton is placed in order to give an embossed effect. This gives a raised appearance to the entire embroidery. After filling the dab of the cotton inside, the shape is closed and stitched. Now the shape is complete, and other shapes are made similarly, and the entire design is made. Once the design is complete, the cloth is measured according to the pillow's size and is cut accordingly. The cloth is cut into three pieces; front, back, and flap pieces. The cut pieces are joined together by stitching. The back of the pillow cover is provided with a slit, which serves as an opening to put the pillow inside. Once the stitching is done, the cover is flipped, as the stitching is done inside out. The pillow cover is now ready for use. 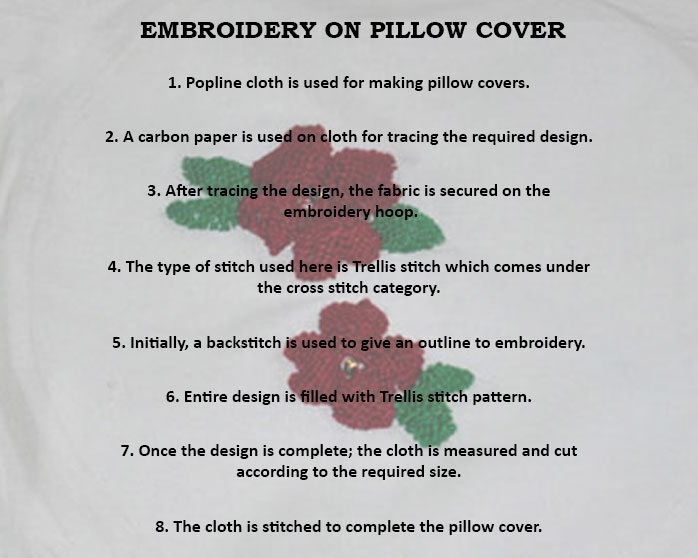