Question: Is there something in your childhood that influenced you to be a Designer?

Answer: We stayed in a chawl, community living. There were multiple families staying on my floor, and our neighbor was a signboard painter. He painted hoardings at cinema halls. I used to help them. I studied in a municipal school and was quite interested in drawing and painting. Everyone used to ask me to draw something for them. I wasn’t so good in my studies and used to do side jobs related to drawing while studying.

Then I got admission to JJ School of Arts for the commercial arts stream. For my diploma project, I got a state medal. My major was in layout and poster design. In our batch government of Maharashtra changed the rule, and only five people passed as the cut-off limit was changed to 60%. At our time, strength was 30. I remember a professor called Mr. Mahajan who used to police us and keep a tab on who is coming into the college. That time the Director used to stay in the Rudyard Kipling’s bungalow. I took up a job in Asia Art Advertising post-JJ School of Arts. It was just above the Capital theatre.

Question: What made you choose Design as your career?

Answer: My friend Yashwant Chaudhary came back from Switzerland while I was working. He has done great work in symbol and logo design, such as the ICICI bank's logo. He was my mentor. By this time, I had done many exhibitions, and he felt that I had a good 3-dimensional understanding. He suggested that I go to ULM school, which is very famous and apt for me. It was a tough decision as I already had a job. But then I thought that I would go there for a year and come back. At that time, foreign exchange was very difficult.  AS I had done some murals for commonwealth games, RBI gave me a lot of foreign exchange, but I didn’t have equivalent Rupees to spend. That was good enough for buying tickets. I was suggested to take up product design. My family also didn’t know what product design is. There I got a state scholarship and could finish my studies. 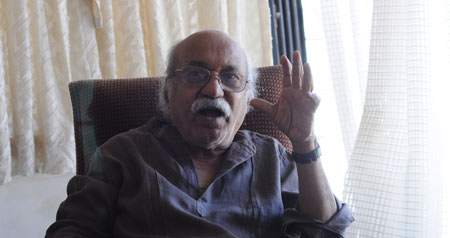 Question: What part of your learning as a student do you remember the most?

Answer: While I was studying in Germany, my project guide was invited to set up NID in India. As soon as I finished my studies at ULM, I was asked to go to NID to teach. Teaching is not my forte. I am more comfortable on the drawing table. At this time, NID was just coming up. Kumar Vyas and I started a product design program at NID. While I was studying at ULM, Kumar Vyas came there for six months from the Royal College of Arts. My ideology at ULM was just fitting in back here as India was just developing, and within the economy, what can we improve. That’s why we thought to start with the ULM philosophy rather than the American way of styling.

We had to do two degree projects at ULM – theoretical and practical. My theoretical project was – ‘How design can help in national planning and developmental programs’. I had a thought that we require a different approach than what was being followed at NID. This led to the setting up of IDC at the IIT Bombay campus.

Question: Who are your major influences in your professional life?

Answer: HfG (Hochschule für Gestaltung) has been my biggest influence. In JJ School of Arts, you learn the skills, but the philosophies and intellectual schools of thought were learned only at ULM. I am heavily influenced by German design – purity, precision, details.

In terms of designers, I was influenced heavily by Professor Tomas Maldonado, the then dean of ULM school. He is the one who brought ULM to where it was. It was he who believed that design is an intellectual and social phenomenon. That design has got a methodology, the Bauhaus philosophy, and others. I was also influenced by Guzzello. Also, the environment at ULM was very inspiring. One could see good products coming around.

Question: Which project has given you immense pleasure?

Answer: I did a big exhibition called Vista, one of the biggest exhibitions of Indian architecture. It had the history of Indian architecture from Dravidian to Moghuls to British to the current. We had scientists, historians, architects in our expert panel while developing the theme. We worked for two years on this exhibition. Evolving the theme took a long time. It was first shown in Nehru Centre. The challenge was that how the exhibition could be flexible as it had to travel to Russia, China, Germany, and other places. The challenge was that the exhibition should carry the gigantism, Indian feel, and each section should tell its time and theme. It was in the 1980s.

Question: Has there been any project which has disappointed you?

Answer: I remember the post box that Prof. Athvankar designed. He had designed a very nice post box. But when the government implemented it, they made a mess of it without consulting us to the extent that we were ashamed to say that it is our product.

Question: Which designers do you appreciate the most?

Question: What are your opinions about design in the Indian context?

Answer: While teaching at NID, I had a discussion with Mr. Sarabhai, and I felt that the right place for Industrial Design would be Bombay due to close proximity with the industries. At the same time, IIT was coming up with a proposal where the Secretariat was offering funds to set up this kind of institute. However, it was a great risk to set up at IIT as they have exams, and it was institutionalized. But I had to work out a program where we got our freedom, and IIT rules are also followed. When others had to do diploma projects, we used to take advantage of the period, and our program used to run for four months more (M.Tech was for18 months only at that time). IDC soon became very popular within IIT, and then they setup up many committees, and they gave us an equivalent status of the M.Tech program. We were the only program that ran for two years, and slowly in some time post the Reddy commission report, all M.Tech programs also became for two years.

Then the Visual Communication (VC) program was set up. My idea was to combine Product Design (PD), VC, and Environmental Design. But Environmental design program never materialized. Whereas, when we proposed the VC program to the IIT Senate, it passed in the first go. We got all the advantages from the IIT, they used to think we are artists, and we enjoyed the advantages under its pretense. Many other departments used to be jealous of IDC. They were surprised at o how IDC can be incorporated in a technical institute. My wife has been my biggest support. When IDC had started, we had just married. She used to sleep at IDC as there was 24*7 work going on.