Gurmukhī script is much older than the present Devanagri although the name Gurmukhi was coined much later. The exact date of birth is not known, however, evidence of the first forms of letters exists much before the mid-16th century, and even before the times of Guru Nanak Dev ji – as the script had originated from an Aryan script kind, called the Brahmi script (5th – 8th century BC). In a well of Athoor (Ludiana district), a kutba was found which was much older than the birth of Guru Nanak Dev ji, in which letters are much closer to modern Gurmukhi script. These letters are much similar to Mahajani script which was prevalent in Punjab much before Guru Nanak Dev ji.

Authentically, the foremost written record in Gurmukhī is at the page numbers: GGS, 432-4. They are believed to be first written by Sri Guru Nanak Dev ji alongwith the paiti likhi (a composition of sacred writings in 35 paragraphs by Nanak that underscore the oneness of the Creator). Most of these paragraphs begin with letters of the Gurmukhi alphabet, in the very form that they are in use today.

During his lifetime, Guru Nanak Dev ji appointed his successor, Guru Angad to popularize the Gurmukhi alphabet as a strong resolve to establish his legacy. Hence, the Gurmukhī script was standardized for use and mass production by the Sikh second Guru Angad Dev ji (1504 – 1552), around 1539 to give a written identity to the Punjabi language. Since then, script has been part of recorded Sikh Scriptures and the teachings in a good number of well-established Holy Granths narrating the Sikh literature [Fig. 1].

The oldest and surviving manuscript version of the Adi Granth / The Granth Sahib, c. 1599 has been preserved in the Guru Nanak Dev University, written in the modern version of Gurmukhī [4]. The original Adi Granth, containing verses by poetic gems of those times: beginning from the founder of Sikhism, Guru Nanak to other Sikh Gurus and saints, was compiled in 1603-4 by the fifth Sikh Guru Arjun Dev ji.

The usage of Gurmukhī letters in Guru Granth Sahib meant that the script developed its own orthographical rules. Later in the 20th century, the script was given the authority as the official script of the Punjab India, while in the Punjab Pakistan, the Persianate Shahmukhi alphabet is in use till date.

Guru Angad Dev ji not only popularized by the script by singing the holy texts to the people; he also gave a new shape and new order to the alphabet and made it precise and accurate in following ways: 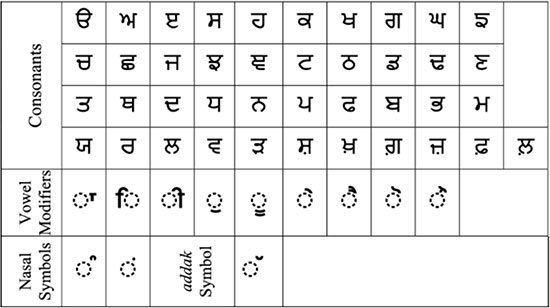 According to Tarlochan Singh Bedi, the Proto-Gurmukhī script developed during the 10th and 14th centuries from the Devasesha stage of the Śāradā script that evolved from this stage until the 14th century; with an intermediate stage being the Siddha Matrika, before the final evolution into Gurmukhī. The Sikh gurus adopted the Gurmukhī form, that has been used in scripture writings and has been used on the golden facade of Harmandir Saheb, the Golden Temple [Fig. 3]. 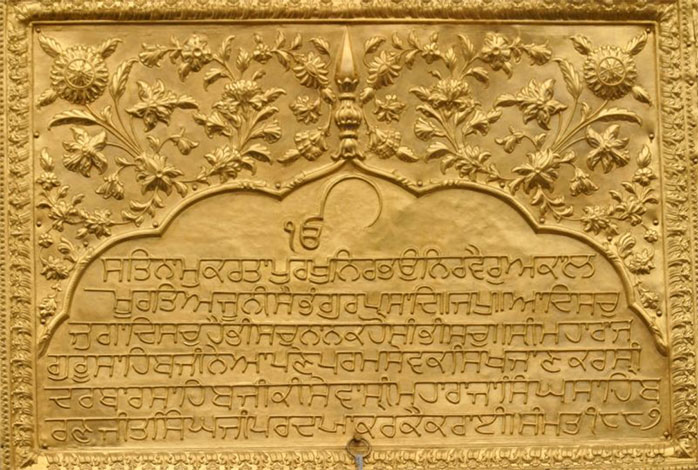 Figure 3. The extended version of the Mūl Mantar at the Darshani Deori: main entrance pathway leading to the Golden Temple

Written languages were reserved for the powerful, the wealthy and the high-castes in those times. Up until that point in history, the dialect spoken by  Guru Nanak and his contemporaries had no written equivalent. There was no writing or reading based on some common writing system. Historically, Gurmukhī script and the manuscript-style writing accomplished a special space for people. It allowed them to be able to read, sing as well as pronounce the sacred texts and hymns written by Guru Nanak in punjabi as well as other languages.