Puppetry is a folk art form that has existed for a long time and spread all over the world. There many types of puppets and their forms all over the world but the principles remain the same. Although there are several traditional puppet genres in India and the overview provided here cannot be all-inclusive as the topic is wide and diverse, it conveys the main features of this theatre form. Puppetry in India has been a means to provide entertainment and to take forward the culture and religion. But in order to thrive in the modern era, this art form needs to adapt itself and somehow build an economy where new and reformed ideas can be developed. One such example can be in the educational sector. Puppetry can help children by making them understand the world through stories.

The use of puppet show as a means of education and communication through the indirect expressions of the puppets gives the puppeteer an opportunity to spread political and religious ideas and also a critique of the same. A puppet show's inherent freedom for improvisation permits reference to present facts and events and a chance to make satirical comments and thus puppets are often represented as bold critics of the society.

As stated by Kamaladari Chattopadhyay in her book “handicrafts of India”, “As a medium, however, puppetry has a few equals and scores many advantages over human performances in moving and holding audiences. It suggests rather than instructs because of an innate subtlety. IT can indulge in exaggerations or distortions without being coarse or vulgar”.

Today, while puppetry has made its way into the cities, traditional puppetry is dying a slow death. Modern puppetry, on the other hand, is gaining momentum, albeit slowly, and is often used as a tool for imparting social messages. Puppeteers now tell stories on everything from medieval kings, Phulan-Devi, Aladin‘, Tejimala‘, Witch-Craft‘ to AIDS because to survive in this digital world, the revolution has become a necessary component for this centuries-old craft. 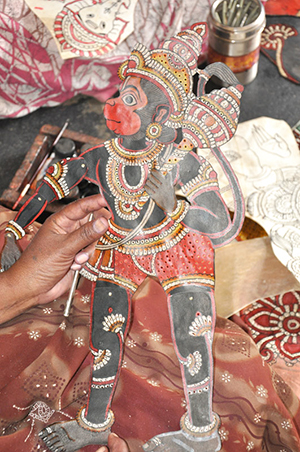