Types of Puppetry in India

• Shadow Puppets are flat and transparent leather or paper cut-outs, fastened to one supporting stick, and manipulated by at least two other thin sticks or rods. Shadow puppets are popular in South India, Indonesia, Thailand, Malaysia, and China. Perhaps one of the oldest forms of puppetry, shadow puppets are found in the states of Andhra Pradesh, Karnataka, Kerala, Maharashtra, Orissa and Tamil Nadu. Ravan Chhaya from Orissa and Tholpavai Koothu from Kerala are the two prominent shadow puppet theatre traditions of India.

• String Puppets or marionettes have spread throughout Asia (as also into Europe), presumably with nomadic gypsies whose ancestral home was i n Northwest and North Central India.This puppet tradition is prevalent in Orissa, Tamil Nadu, Karnataka, Maharashtra and Rajasthan. Sakhi kundhei (companion doll) also known as sakhi nata, is Orissa's string puppet. The puppets are made of wood and the long flowing decorative skirts hide the legs. A puppet is manipulated by the strings (usually five to seven) attached to a triangular wooden control. In Orissa, the ends of the strings are tied to a triangular wooden frame or to a horizontal bar. In Rajasthan, they are simply looped around the puppeteer’s fingers. String puppets are assumed to predate the Indian classical theatre. Their first mention is in the Mahabharata of the fourth century B.C.

• Rod Puppets are supported and manipulated by sticks or thin metal rods. This technique, as mentioned above, is commonly employed for shadow puppets. But it is also used for the round or doll-type puppet. The most primitive rod puppet is the puppet whose trunk is formed by a stick, the lower extension of which is the handle for its manipulation. In its primitive form, the stick puppet goes back to prehistoric times and is indigenous to all Asian peoples. The puppets are about 60 centimeters in height; their heads are carved out of wood and are painted. Bengal's tradition of rod puppet performance is known as Daanger Putul Nach. The themes of this performance are derived from the Ramayana, the Mahabharata, the Puranas and jatras.

• Hand or Glove Puppets are also considered to be among the earliest puppets. Because of their simplicity in form and manipulation, they are known all over Asia. This is a type of puppetry where the puppeteer's hand is slipped inside the puppet and its movements are acted out by his fingers. Usually, the forefinger becomes the head of the puppet, and the thumb and the third finger act as its two hands. Hand/glove puppetry is quite prevalent in Orissa, Kerala, Uttar Pradesh, and West Bengal. A popular glove puppet plays in Kerala known as Pava Kathakali uses puppets that are carved delicately in wood, painted, gilded, and decorated by transparent coral and peacock feathers. The puppets are carved in the manner of Kathakali actors with their headdresses and costumes. 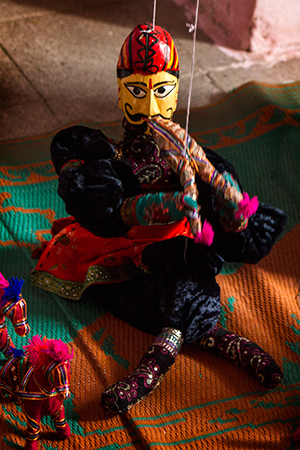