The art of Madhubani requires practice and skill. In the older days making Madhubani artwork required simple raw materials, which are easily located in the village such as bamboo sticks, and cotton. Firstly the cotton is wrapped around a bamboo stick to serving as a brush. Then the brush is dipped in colors and applied to the fabric. The outline was done with double lines. The gaps between the two lines are filled with the cross or straight lines. In those days vegetable colors were used to make the Madhubani painting.

But in the current scenario, the Madhubani artist uses colors, which are easily available in the market, and this makes the work easy for them. Initially, the making of Madhubani start by choosing the figure and on the canvas the figure is drawn using the freehand technique. The main characteristics of all the Madhubani paintings are double line border, decorative floral patterns, abstract figures of deities and bulging eyes of the figures. Once the figure is completed. The bright colors are chosen and paint is then filled inside the figure and glittering paints are used to paint the zari or borders of the figure. Then the outlines will be given to the figure later. Usually, borders are given to the Madhubani painting; borders will be of double lines filled with either paint or patterns. 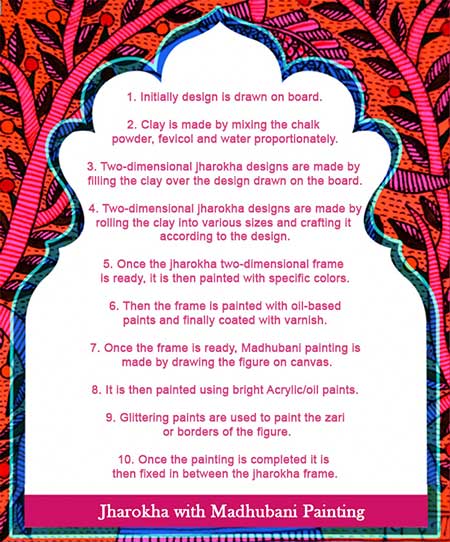 Initially selection of the figure is made and before starting with the Madhubani painting, first the background has to be made which is Jharokha and the Jharokha is designed according to the painting have to be made. The design of the Jharokha is designed then the design is drawn on board and these boards are then cut into the required shape. Once the Board is ready with the shape, clay work begins. Most common figures are preferred by Hindu deities, flora and fauna, and social events such as weddings and festivals.

Initially on the board, the design is drawn for the reference purpose. Newspapers are then soaked in a water for few minutes and once it is properly soaked in water it is then crushed and used as the base to begin with the clay work. Two-dimensional Jharokha designs are made by rolling the clay into various sizes and crafting it according to the design. This clay mixture is made by mixing the chalk powder, synthetic adhesive and water.  By mixing these three mixtures proportionately dough is made. This Jharokha art with Madhubani painting is made using the board. And these traditional artworks are painted using Acrylic paints and oil paints.

Once the Jharokha two-dimensional frame is ready, it is then painted with oil-based paints. After the paint is dried, it is then coated with varnish so that it will get resistant to water so that it can be washed with water. Jharokha are generally made using waterproof materials.