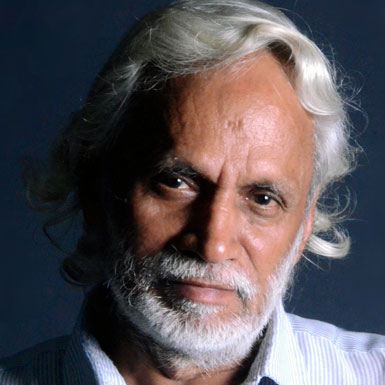 “What is now required is not a skilled designer (by skill I mean knowledge and aesthetics sense included) but a broad based socially well integrated, humane designer with a broad global vision.”

- In: ‘Design is no ordinary thing, indeed’, THINKING DESIGN by S. Balaram, pp. 6

“No matter how design is defined, the fact that it is a powerful tool is unquestioned.” [1]

Prof. Singanapalli Balaram [1] was born in 1944 in a farmer’s family in Gunnathota Valasa, a tiny Agraharam (a village gifted to a scholar by the king) near Bobbili town, Andhra Pradesh, South India. In his younger days, he got attracted to the songs sung during festivals in a storytelling mode – especially, the Tholu Bommalata, a shadow puppet theatre tradition of the state of Andhra Pradesh. He got involved in revamping the pupet-making for the shadow puppet shows in paper and organized such shows for children in his neighbourhood. He has said he owes his life to his teacher, Varahagiri Veni Madhavarao without whom he would have been like most children in his village - without education and tied to life in the fields [2], [3].

“Whenever we were taught something, he would make sure that we would connect with it. Under his guidance, education was more of an experience. For instance, when teaching history, he managed to procure rare coins and trinkets and help us see and feel the piece of history. It was because of this that I realised how every object, animate or inanimate, has a story behind it, just waiting to be told in the right manner! Sir helped me to get a scholarship at Government Polytechnic, Visakhapatnam, and pursue a career in design at the National Institute of Design.” says Balaram [3]

Prof. Balaram followed his dreams against all the odds. After receiving his diploma in Mechanical Engineering, he joined JK Paper Mills. His professional journey began as a signboard painter and then he became a mechanical engineer. 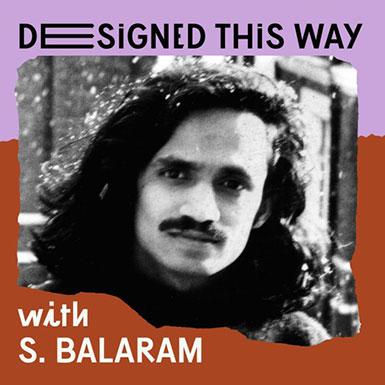 When the film people and my teacher also got a little confident that this boy is smart, he can do work; he allowed me to do ‘signboards’. Sri Subramaniya Vilas, they will give him the board title and the outlining detailing part he will give it to me. I will get all my inspiration from film titles, for example, ‘Gemini’ or ‘Aviam’ and try to imitate them.” – shared by Prof. S Balaram, a podcast as part of ‘Designed This Way’ at SoundCloud, May 2021 [4]

He had no idea about what design is, till one of his friend shared a newspaper advert with him from the National Institute of Design (NID), that called for engineers and architects with an inclination towards the arts. Without much thinking, he applied for NID and to his surprise was selected.

He utilized this opportunity to full and joined NID for post graduation in the later 60s. NID gave him the essential freedom and opportunity to be around the incredible design luminaries of those times; from the likes of Bob Gill, Charles and Ray Eames, George Nakashima. Their batch at NID received guidance from eminent design teachers: Prof H Kumar Vyas and Prof Sudhakar Nadkarni. Balaram was part of the first batch of students; alongwith AG Rao, Sudrashan Khanna, Chattopadhyay – that struggled through the rigorous and challenging process-based learning as part of the industrial design curriculum. He actively pursued his interests in short story writing, packaging design and film criticism. He also shares his love for designing critical ordinary objects for the masses in India [2] .

The second golden opportunity came his way to join the Royal College of Art, London. This harnessed his design training as a young creative mind further under the guidance of Sir Misha Black and Bruce Archer.


He has contributed as an expert in the roles of Chairman of Extension Programmes, Co-ordinator, Foundation Programme, Associate Chairman and Industrial Design at the NID. He was Governing Council Member of The Centre for Environmental Planning and Technology (CEPT), Ahmedabad; Vice-President of The Society of Industrial Designers of India. He founded the Craft Development Institute in Kashmir (2003), with a resolutory vision to combat the social complexities their through Design practice and education [5], [6].

He is a recipient of the honorary fellowship of the Society of Industrial Designers of India and an invited member of the advisory board of ‘Design Issues”, U.S.A. Four of his inventions have been patented by NID. NID has also won the first ICSID - Philips award (International Council of Societies of Industrial Design) for its outstanding achievement in Industrial Design. One of the seven projects which won this award was Prof. Balaram’s [5], [6].

He has won numerous awards which include – the Ron Mace international award for Universal Design, the Helen Keller award for outstanding contribution for people with disabilities, and the UNIDO-ICSID award for Design for Development [5], [6], [7].

He was invited speaker as part of The 2nd International Conference for Universal Design in KYOTO, under the theme: the North-South problem / Education, (2006) hosted by the International Association for Universal Design (IAUD) [8]. Further, he was also invited to the third IAUD conference, 2010 at Hamamatsu. The most significant international meeting organised by him was the ‘UNIDO-ICSID meeting on Design for Development’, the first of its kind meeting to be held in a developing country [5], [9].
Indian Language
English Bangali Gujarati Hindi
Kannada Malayalam Marathi Punjabi
Sindhi Tamil Telugu Urdu