Can you see a hidden message in the image below?

Can you see the text "Deadline is the best motivation"? If you cannot, try squinting your eyes to the extent where the picture seems blurred. If it is challenging to squint your eyes, you can also step away from the screen. Alternatively, you can zoom in and out if you are seeing this image digitally. Do you see the hidden text now?

This is a type of figure-ground reversal. On the face of it, the image above most likely appears to be a collection of randomly arranged blocks. It shows a message when you squint your eyes or change the focus of the image to make it blurry.

Why does a blurry image change what you see?

When one squints their eyes, a significant low spatial-pass filtering occurs, causing us to see overall shapes rather than distinct features and edges. As a result, 3D masking cues are eliminated, allowing for a new assessment of what is considered figure and ground.

How to create an adept figure-ground reversal?

The first step is to pick the correct font and the sentence or word to transform. Although one can use any font to achieve the desired illusion, it is crucial to eliminate any visual signals that could help the viewer recognize the true purpose of the final illusion. For this precise reason, letters like "C," "S," "D," etc. must have very little or extremely low curves in the font. After extensive investigation, it was discovered that "Apex Mk3" had similar characteristics and was the ideal typeface for the illusion. Additionally, the font's letter spacing should be identical, and one should manually adjust the tracking to match the letter thickness.

Even though it is feasible to achieve the same illusion with just one word, using a sentence adds a sense of depth and highlights the illusion's impact.

The second step is to adjust the spacing and convert it to an outline. The font spacing was made equal and matched with the letter thickness to decrease visual cues.

One should also minimize the spaces between each word to make recognition simple and the space uniform.

The third step is to create a negative. To make an extrusion, one must first construct the negative of the desired sentence. The extrusion would give the impression that a random assortment of blocks was scattered throughout space and enhance the illusion.

The fourth step is to create an extrusion using the negative. It was discovered that additional visual cues, such as shadows and reflection of the curves, diminished the illusion.

An additional step was recommended to combat the problem mentioned in step four. The fifth step is to create a wire mesh of the extrusion. The extrusion was converted into a wire mesh, eliminating the extrusion's light and shade properties.

The sixth step is to fill up the figure in the wire mesh. One should combine the wire mesh and the negative to create the desired effect.

However, not all figure-ground reversal needs the viewer to squint their eyes to see the text. For example, it is pretty clear in the picture below that the white is the foreground, and the back is the background. Therefore, one can identify the word CAP without any issues. 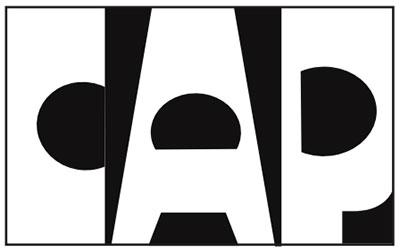 The exploration below is quite compelling. Depending on which part of the picture one looks at, what one considers figure and ground changes. 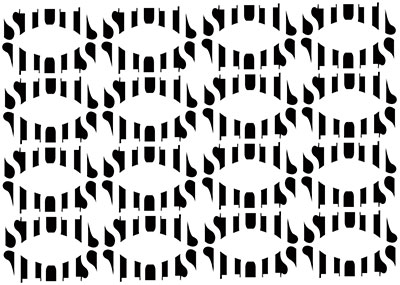 For example, if you look at the picture below, the black part is considered the ground and the white part is viewed as the figure. Therefore, one can make out the word "STUTI."

When one adds a conventional figure, the white is considered the figure; however, finding the word STUTI becomes a little bit difficult. 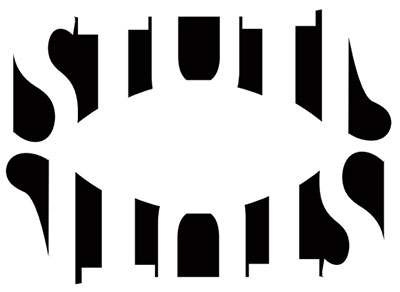 You can find more explorations of the figure-ground  reversal in this pdf link.
• Figure-Ground Reversal......