Camouflage occurs when there is inadequate figure-ground segregation, making it difficult to perceive an object against its background. The object is said to be camouflaged if our brain cannot distinguish and recognize it from its surroundings. For instance, in the image below, the figure against the darker background is the light-green caterpillar, making it easy to identify. It is said to be camouflaged when we struggle to achieve this kind of differentiation. 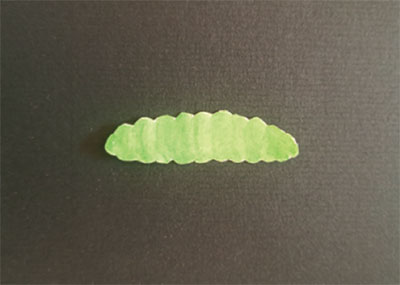 In nature, predators and prey use camouflage to blend in with their environment and prevent being seen. The prey may disguise themselves as tree branches, leaves, grass, or other objects to avoid being attacked. Moreover, military personnel, police, hunters, and nature photographers may have specially made suits to blend into their environment and hide from potential opponents or targets. The suit creates a three-dimensional breakup of the wearer's shape rather than a linear one.

An American artist Abbott Thayer explored camouflage in the natural world of birds and animals in great detail in the late 1800s and early 1900s. In his book "Concealing-Coloration in the Animal Kingdom," with his son Gerald Thayer, many camouflage techniques are discussed. These include countershading, and disruptive coloration, among many others. Some of these are explored in greater detail in this subsection. Camouflage was used extensively in the first world war by painting warships so that one disrupted their figural properties.

Animals employ natural camouflage as one strategy to protect themselves. There are numerous ways to accomplish camouflage. One approach is for the animal to blend in with its surroundings, while another is for it to displace itself as something tedious or hazardous. There are four common types of camouflage: Blending, Countershading, mimicry, and disruption. These four types will be explored using the caterpillar example below.

Blending: A technique for concealment whereby an object is made to blend in with its surroundings or background so thoroughly that it can no longer be recognized as a separate entity. Caterpillars have restricted mobility and must employ creative ways to protect themselves from predators. The ideal strategy is to blend in with its surroundings, so identifying them is difficult. Therefore, the caterpillars are typically green in colour to blend in with the leaves they consume, making it challenging for their predators to distinguish them from their environment. 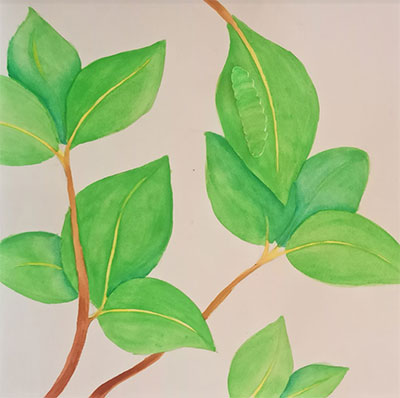 However, there is an issue. When viewed from the side, the upper half of the caterpillar's body appears lighter than its bottom half, which makes it appear "solid." This makes it easier for predators to spot as figure-ground segregation is made simpler against "flat" leaves. Therefore, they use countershading to deal with this situation. 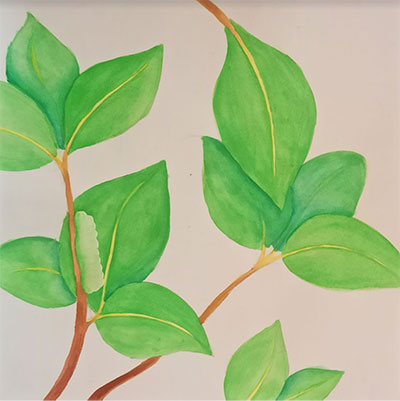 Countershading: Countershading (also known as obliterative camouflage) involves using different colours on upper and lower surfaces in gradations of tone. In the caterpillar's case, it will start with a pale belly that will change into a darker back.

When light falls on a caterpillar, and its belly is a lighter colour than its back, it will appear uniformly coloured, giving it a "flat" appearance that prevents the predator from spotting it against the "flat" leaf. 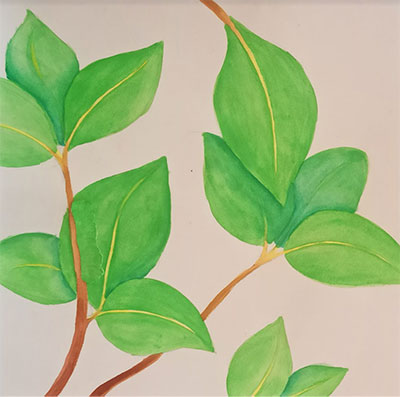 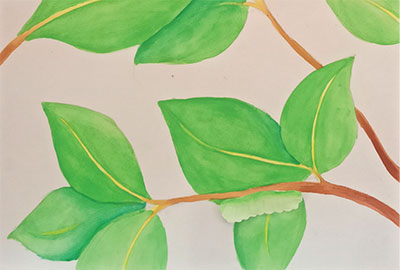 To seem "flat" when exposed to sunlight, a caterpillar that eats upside-down needs to have a belly that is darker than its back. The term for this is reverse countershading. 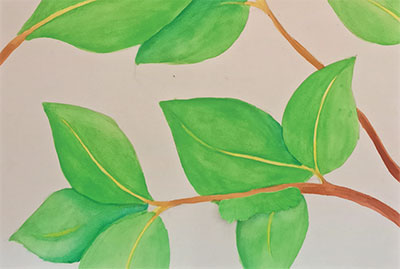 Mimicry: A unique form of camouflage in which an object is disguised to look so much like another object that it is likely to be mistaken for. Such as a caterpillar having a line on its back that resembles the leaf's midrib. This design element will enhance the camouflage. Since the figure and the ground are so close in colour and design, it is difficult to tell the caterpillar from the leaf. 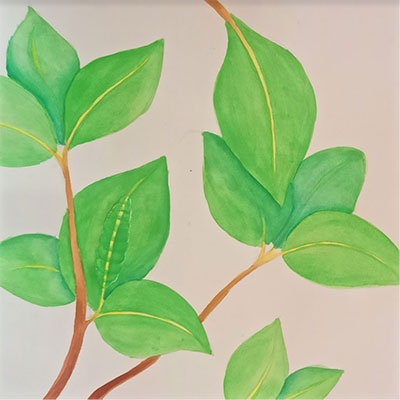 Disruptive: An object's surface can be covered in patterns of sharply contrasting shapes, making it very challenging to identify the object as a single entity—for example, the striking dark patterns on the caterpillar's back. The 'dazzling' pattern creates the illusion (shadows) of numerous sections, making the caterpillar appear to be of various pieces rather than a unified caterpillar. Additionally, this makes figure-ground segregation more difficult. 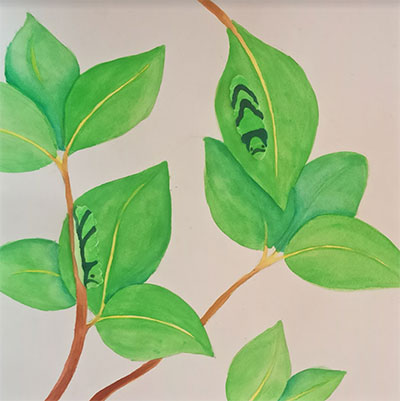 When comparing various camouflage methods, colour has the most significant impact on reducing figure-ground segregation. The colours' hue, value, and intensity must be used at proper levels to create camouflage.

In addition to the above, for camouflage to be successful, it must exploit several Gestalt principles discussed above in Sections 2.3 and 3.1.

Proximity: The camouflage pattern is made to never look like what it is to the casual eye, diverting the brain from perceiving it as a group and ignoring its neural ability. The human mind naturally attempts to group like items by proximity. 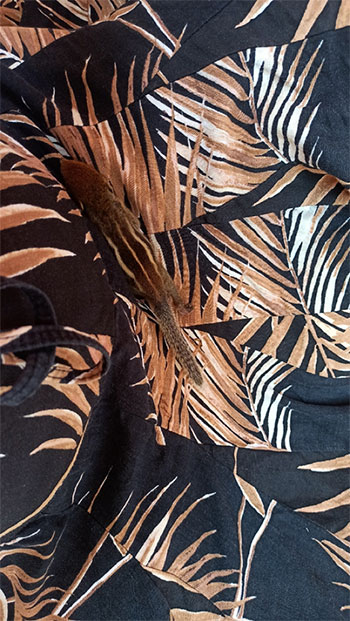 For example, in the picture above, the pattern on the newborn squirrel's back was matched and aligned with the fabric's design to create a camouflage effect. Due to this, it is challenging to separate the squirrel's complete form from the ground (fabric). Since the squirrel's tail is not concealed, it is simpler to recognize the animal. The pattern alignment is disrupted if the squirrel moves, rendering it no longer disguised.

Good Continuation: The pattern assists in diminishing the outline of the object or organism, which is typically instantly recognized in any environment and may be the most beneficial aspect of camouflage. 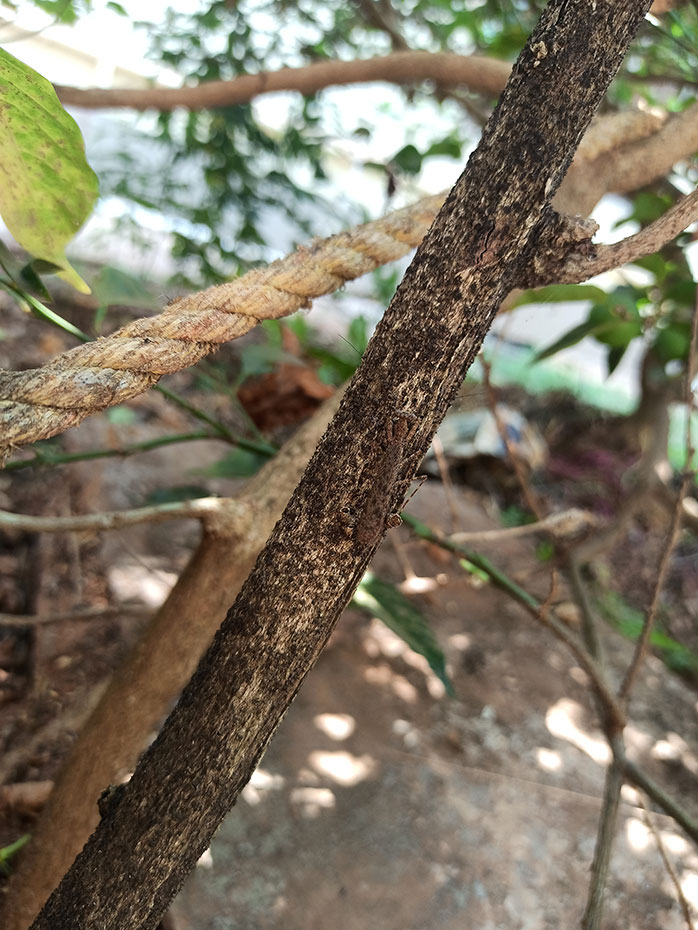 For example, can you see a grasshopper in the picture above? It is not easy to spot. The camouflage pattern is intended to disrupt the caterpillar's form to prevent casual observers from spotting it by searching for a caterpillar's shape.

Another example can be seen in the picture below. An identically coloured moth camouflaged on the metallic leaf in the centre. The moth's structure and the leaf's backside have been matched. The gloss on the leaf has been lined up with the portion of the moth that is lighter in colour. Because of this, the figure-ground separation is challenging enough for us not to see the moth at all. 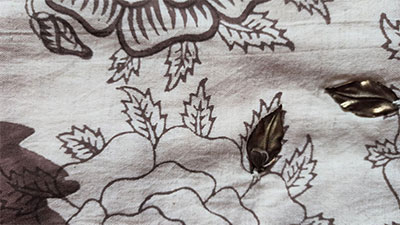 When we look closely, we can see that the moth's wings are covering the midrib of the metallic leaf. This indicates that the leaf is a background element, and the moth is the figure. 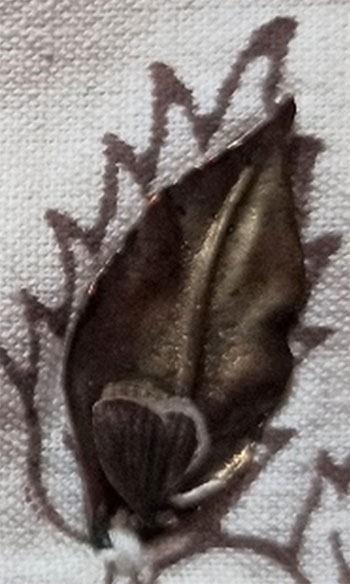 Pragnanz: Let's look at the picture of the girl below. Given the objectives of camouflage, an effective pattern tries to deceive the observer into thinking the wearer is not a human shape right away. Although it is not the same as invisibility, the goal is to keep the brain processing longer. The girl's outfit shares many similarities with the couch's design. As a result, her outfit may appear to be part of the background to us. The figure is only seen with her head lying on her hand. 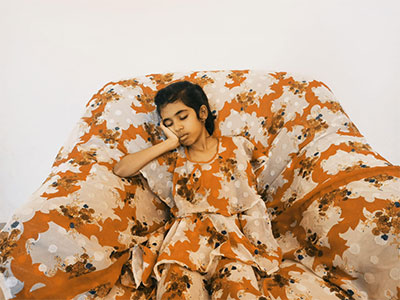 The figure-ground division would have been more straightforward if the dress and the couch were made of plain cloth. The dazzling pattern enhances camouflage by diminishing the shadows. Other patterns (such as stripes) would not have worked due to the discontinuation of patterns between the sofa and the girl—dazzling patterns aid in removing such discontinuity.

Another example is the picture of a toy dog blending into its background. This image is taken from the top so that only the backside of the toy dog's colour is in view. Due to its similar colour, the toy dog merges with the floor below, making it difficult to see. The dog's features, such as the white patch, which resembles the floor's design, contribute to this camouflage. 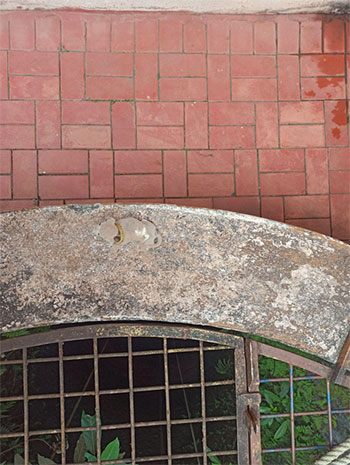 The clues that assist us in distinguishing between the figure and the ground include the break in the neck area, the gold accent, and the dog's faint but distinct shadow.

Other photographic explorations of camouflage.
It's challenging for us to pick out the female on the left-hand rock because she blends in with the background and is bending forward. The rock surface successfully hides her because of the colour, form, and variations in light and shade on her top half. 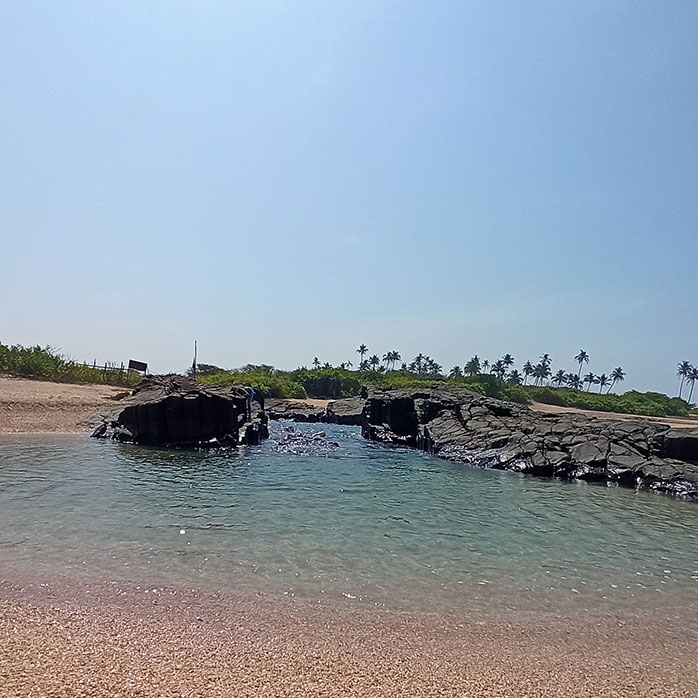 When we zoom closer, we can see that her jeans have a different shape and colour than the rock, making them stand out and allowing us to see her as the figure against the background. 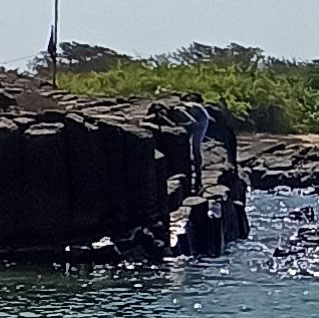 Due to their similar coloration and sunlight falling on them, the flowers the girl is holding in this picture blend in with her outfit. However, the clues that allow us to differentiate between the figure and the ground are the shadows on the flowers and the green stalks. 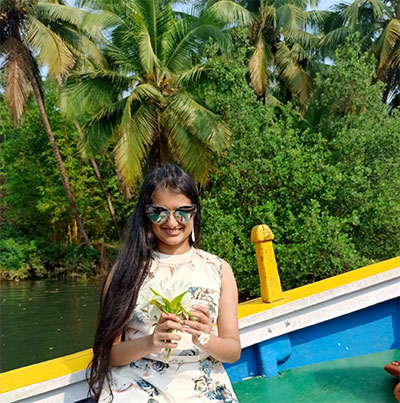 In the picture below, we can see two girls facing the wall. The shorter girl is closer to the wall and the camera. It is challenging to distinguish one from the other because their hair blends due to colour, texture, and shape similarities. 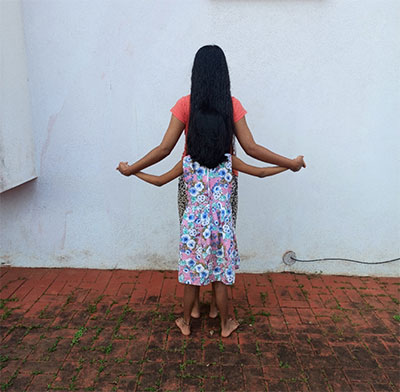 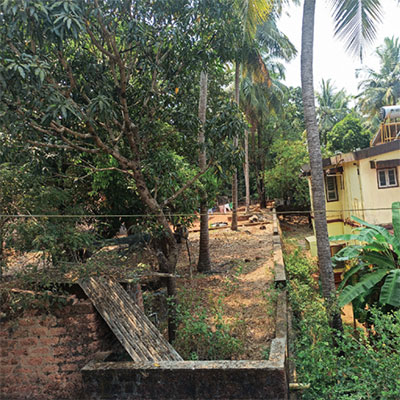 In addition to sharing the same colour as the tree, the positioning of the monkey holding its young in front of the mango tree also serves as camouflage. It is positioned such that it appears to be a limb of a tree continuing into the foliage. When we zoom in, the monkey is easy to see. It is also evident from the tail. 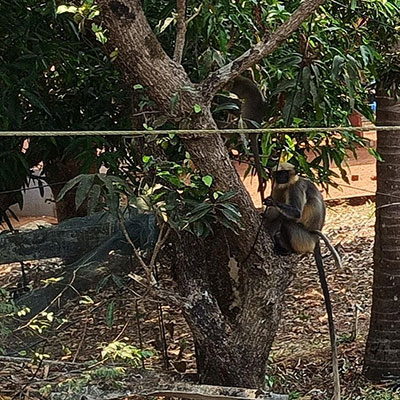 What applications does camouflage have in design?
Plays and movies can utilize camouflage to achieve the desired consequences, such as hiding some items and revealing them afterwards.

When creating patterns for apparel or other surfaces that must blend in with their surroundings, camouflage is used. A wildlife photographer could, for instance, dress in a manner to approach animals up close without startling them. Camouflage has been extensively employed in defence across the world. Finally, creating such patterns gives designers a heightened sense of figure-ground segregation and various challenges concerned with colour and interchange thereof.

Here is the pdf and video exploring this phenomenon:
• Camouflage......