Is this a wave pool? Can you see the picture move? Or is your mind just playing tricks at you? 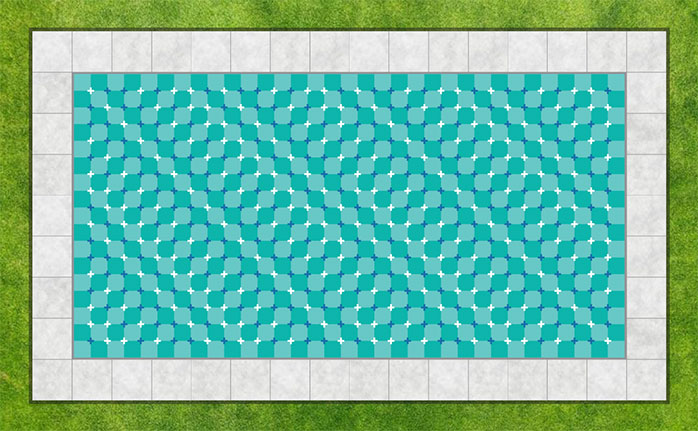 As you can see in the picture above, the optical illusion has a checkered background with alternating teal and light blue squares. Each square has a '+' symbol in white and dark blue in the corners. Only perpendicular straight lines have been used to create the entire image. This is called the Primrose Field illusion by Akiyoshi Kitaoka, inspired by the peripheral drift illusion.

How does this illusion work? What makes it look 'wavey'?

According to Akiyoshi Kitaoka, two aspects influence the strength of this illusory motion. Firstly, stepwise brightness profiles and contrast levels in colours enhance the peripheral drift illusion.
The '+' symbols are arranged in a diagonal pattern with some variations. There are two rows of '+' symbols on some occasions and one row on others. Kitaoka believed that this variation helped create the wave effect.

Movement detectors in peripheral vision detect the time and direction discrepancies, and because they are synchronized for elements of relative orientation, the elements appear to move as coherent blocks. As can be seen, diagonal columns of white primroses alternate with squares of dark pink primroses in the ocean wave illustration below. This was the original illustration provided by Kitoka. As a result, the columns appear to be moving against one another. The specific receptor cells in the retina that are implicated are now being investigated. 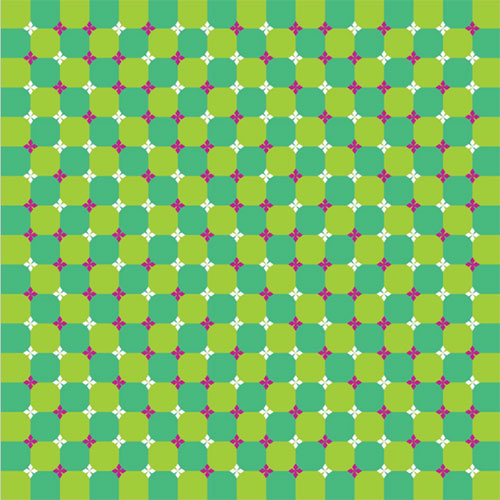 Scientists believe that the optical illusion's waves are caused by 'fixation jitter,' or involuntary eye movements that give the impression that items near what you're fixated on are moving. Another explanation is that dynamic changes in your neuron confuse the motion detectors in your visual cortex, leading you to believe the image is moving. 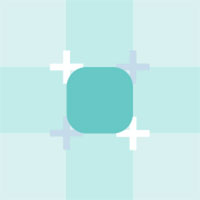 Does changing the '+' symbol to another shape enhance or diminish the illusion? 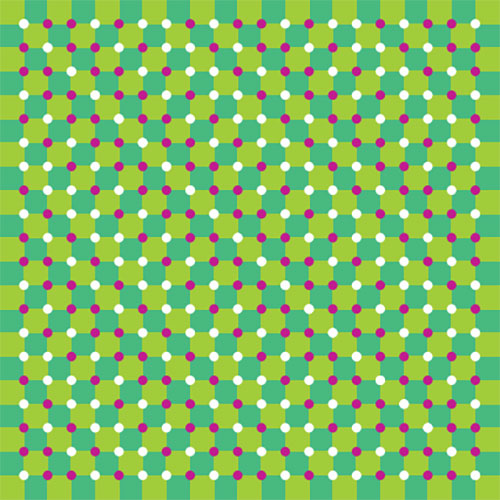 As seen in the picture above, changing the primroses to circles reduced the wave effect. This could be because the primroses and '+' symbols at each square's corners give it a rounded appearance, which aids in forming waves. 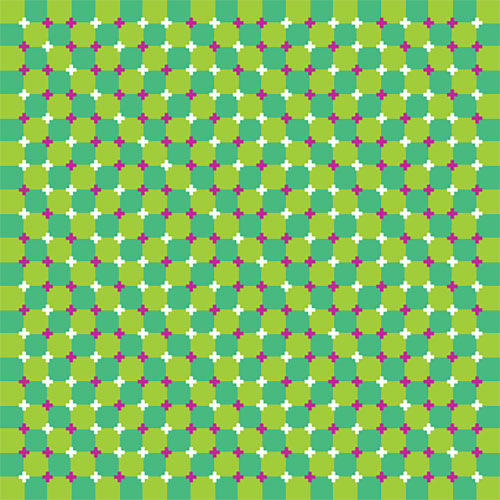 How about when you change the sequence of the '+' symbol? 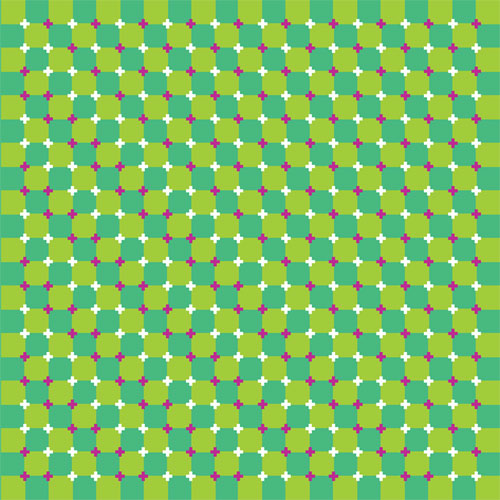 The primroses are arranged in a diagonal sequence with variations in them. Sometimes there are two rows of '+' symbols, and sometimes there is one in the row. The uneven repetitive sequence leads to the 'wave' effect. 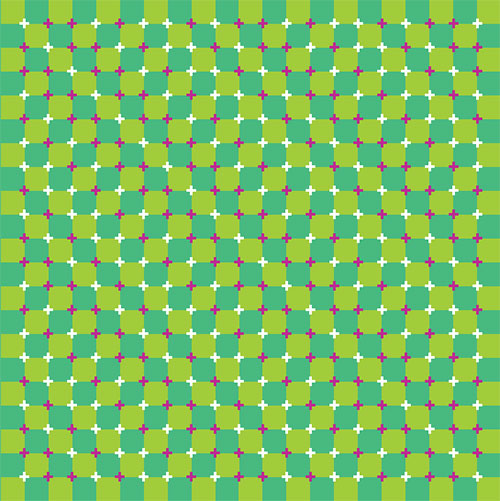 How does changing the background colour affect the illusion? 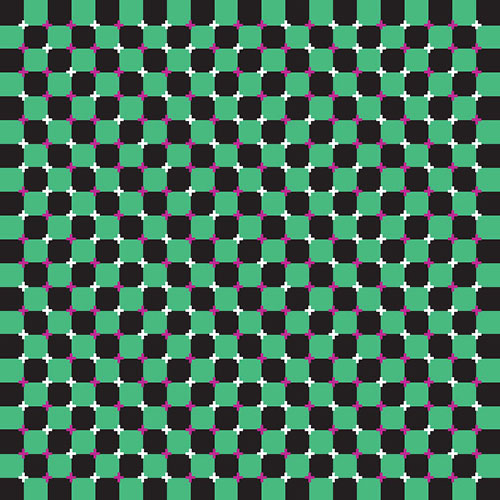 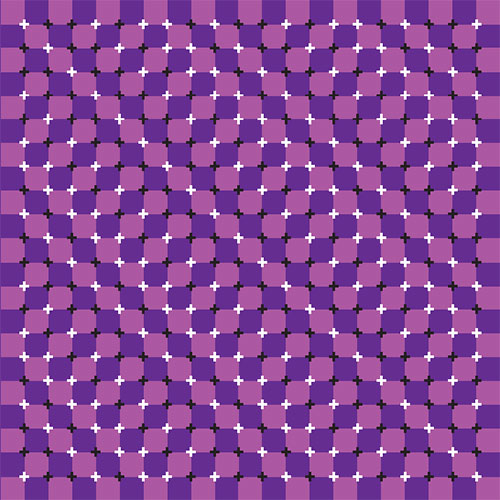 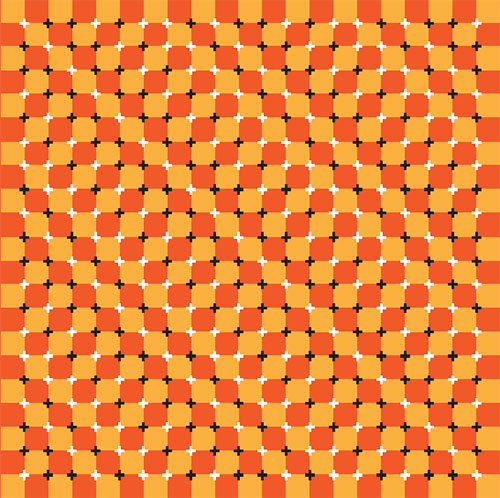 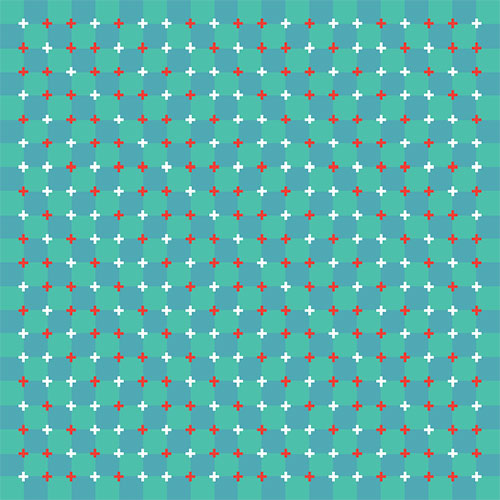 Can the illusion be seen in other shapes? 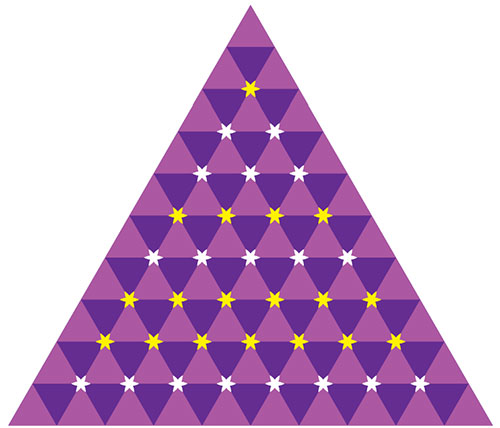 The above explorations (Figure 6.3.l and 6.3.m) show that the illusion can only be observed in rectilinear shapes. The results of this exploration will be helpful for graphic designers working in the textile industry who are involved in creating shapes and patterns.