• Prof. M.P. Ranjan, one of the leading design thinkers and luminaries in the Indian Design Community was born on 9th November 1950 in Madras.

• His experience in design education and practice spanned four decades in association with NID, till 2015 with his demise at the age of 64.

• He has been well known and respected worldwide for his design acumen and an influential thought leadership.

• He did his Post-graduation in Furniture and Product Design at the National Institute of Design (NID). He joined NID in 1969. By 1972, he became a faculty member at NID Ahmedabad.

• From 1974-76, he left NID to establish a design consultancy firm in Madras and also, assisted in his family’s concern of manufacturing toys and furniture. Therefafter, he again returned to NID as a full-time faculty member in Industrial Design from 1976.

• He headed the consulting arm of the NID from 1981-1991. During the period of those ten years, he
facilitated more than 400 collaborative projects between the faculties and their corporate or government clients.

• Between 1991-1995, he set up a prolific set of design publications and was known, among the students,
for teaching core design theory courses since 1981, naming it ‘Design Concepts and Concerns’.

• He was responsible for creating and conducting numerous courses dealing with Design Theory and Methodology, Product and Furniture Design, and numerous domains of Digital Design.

• He conducted research in many areas of Design Pedagogy, Industrial and Craft Design, and on the role of design policy in various sectors of the Indian economy.

• In October 1999 he was invited by the Japan Design Foundation to speak at the Asia Development Forum Meeting at Osaka following which he visited China at the request of the UNDP to study theBamboo Board Industry in China. He delivered a keynote lecture on bamboo utilisation at theInternational conference Yiyang, Hunan Province of China.

• In October 2000 he visited Paris to conduct workshops at ENSAD and ENSCI titled “Lifestyles” and “Lifelines”. He attended the “Doors of Perception” workshop on Design in the knowledge era and  presented case studies at the associated e-culture fair in Amsterdam.

• In November 2000 he conducted the “Bamboo Boards & Beyond” workshop for the UNDP that resulted in the development of a largenumber of products that were displayed in Ahmedabad and Delhi, to further the objective of positioning bamboo as an eco-friendly material of the future.

• In April 2005 he was invited by SABS, South Africa to lead a team of designers at the Interdesign 2005 on Rural Transport and in September 2005 he visited Germany at the invitiation of the IFG Ulm for a meeting on the future of the IFG initiatives organized by the IFG Foundation Board, Ulm.

• He was appointed as the Chair of the task force on GeoVisualisation set up by the Department of Science and Technology (DST), Government of India in April 2006.

• He was the Founder Head of the Centre for Bamboo Initiatives at the National Institute of Design in Ahmedabad, Gujarat, India till 2010. The Centre’s mission was to evangelize local design and production as a tool for economic development.

• He was design chair at Design Innovation and Craft Resource Centre (DICRC Design Chair) from April 2012 to April 2013.

• He served as the Governing Council Member of the IICD, Jaipur. He also served as an Adjunct Professor (Design) at the Ahmedabad University (2014-15) and also, Visiting Professor at CEPT, Ahmedabad.

• He was counted among the world’s top 20 Design Thinkers along with IDEO David Kelly and Brad Pitt.

• He has been an advisor to the Development Commissioner of Handicrafts, Government of India and an active member to a number of advisory committees set up by Government to advise on design and craft related matters.

• Alongwith his wife, Prof. Aditi Ranjan, an erstwhile faculty member in the department of textiles as well as his collaborator at NID Ahmedabad - their efforts led to many developments at the instituional education levels as well as they authored and edited the well-known, landmark book Handmade in India. They have one daughter by the name Aparna Ranjan, a practicing graphic designer, who collaborated with Ranjan to manage his design-in-india blog.

• Ranjan’s blog envisages a resource of writings and visual presentations on his areas of interest, design projects and teaching programmes – an inspiration for students, designers, practitioners and educators till date. He shares his interests as well as devlopmental involvements in education spanning around the fields of Design, Design Theory, Modelling, Crafts, Information Technology, Bamboo, Usability.

• Ranjan proactively authored besides the blog as well. His other landmark books include: the Bamboo and cane crafts of northeast India, BAMBOO INITIATIVES – Design Strategies from NID - BCDI and the Katlamara Chalo: A Design for Development Strategy Book: Design as a Driver for the Indian Rural Economy © 2005 – 2007 CFBI [Centre for Bamboo Initiatives]-NID 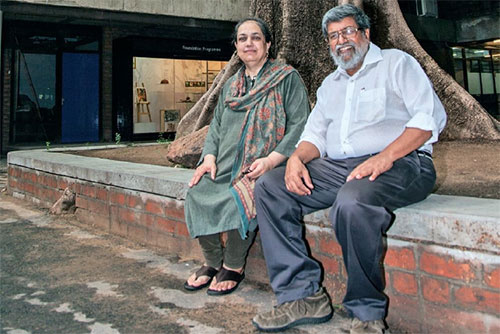