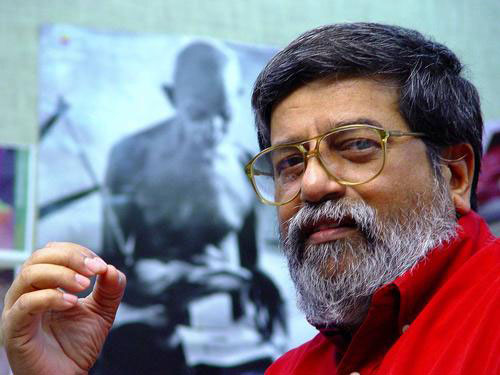 “Design is like a potent seed that can grow if it is nurtured by society and through collaborative processes can produce huge change in the world.”

- by Prof. M P Ranjan, essay contribution ‘Nature of Design: The Need for Nurture in India today’, WDCD 2011 Event Report accompanying the What Design Can Do for Access [1]

Prof. M.P. Ranjan (full name: Mundon Pandan Ranjan), was born in 1950 to an entrepreneur father, MV Gopalan from Madras, South India. His father was an inspiring force in his life and helped him undertake Furniture Design as his field of teaching, practice and practice-led research. In his younger days, he actively partnered with his father and trained himself as an ‘expert cabinet maker’. It was this skill development that he received from his native roots, that became a springboard to his entry to NID Ahmedabad as a student [2], [3]. Ranjan is highly respected in the design community as a person who had unique insights about wide range of opportunities and responsibilities that lay before designers.

In 1960s he joined NID for post graduation in Product and Furniture Design. Thereafter, he was roped in as a faculty member in the same discipline. He embarked on an ambitious adventure in design under the guidance of eminent teachers like Dashrath Patel and Kumar Vyas.

Prof. Ranjan strongly believed in the cause of co-learning and co-building furniture as well as products for the people belonging to the grassroots of the Indian reality and underpinned in Design for Development. His writings about his teaching, design and research-led practices are a living blueprint of his thought leadership to work towards independent design education thinking. He worked as part of the founding committees to build the design education base for the institutes: IICD – Indian Institute of Crafts and Design, Jaipur [4] and BCDI – Bamboo and Cane Development Institute, Agartala [5].

“Design is a powerful force that shapes culture and it is a professional activity that is beneficial for both community and business alike.”
- The Header line from M. P. Ranjan’s blog “Design for India” [6]

Prof. M P Ranjan’s interests as a designer, practitioner, educator and a thought leader revolved around multitudinal opportunities that the field of design incorporates. As an educationist with development design agendas in mind, Ranjan’s mission included dedicated efforts and work towards the introduction of design education at the school level, advanced design research in visualisation and cognition and their roles in the management of design innovations, advanced studies in Bamboo and its applications in craft and industrial situations, design publishing and design promotion, and curriculum development for new design schools and for new design programmes in technological institutions [7], [8], [9].

Prof. Ranjan was a firm believer of the power in-built in the craft sector alongwith the market-oriented consumer goods to benefit society and people in India. In his old interview given to NID students as part of the STUDIO magazine, Vol. 2, No. 2, March ’95, NID; he shares, “Market-oriented consumer goods design is one area. In fact, it could also be the areas that the West can’t think of, for example, the craft sector is unique to us. It represents employment generation at very low capital outlays. Design can play an important role here.” [10] 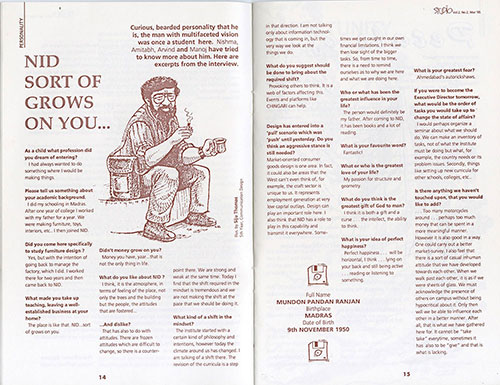 Systems Thinking and Design part of the academic programme, established by MP Ranjan at NID, involved the application of the systems approach towards complex issues and wicked problems from the socio-cultural-economic-environmental perspective with a high level of ambiguity, uncertainty, and complexity [4], [11].

M.P. Ranjan developed and imparted concepts through a collection of metaphors (left); his major thinking models and frameworks gave students an effective guideline for brainstorming and churning ideas to understand Design and what design can do (right) | Image Credits: MP Ranjan’s blog design-in-india model collections of 2013 [11]

He utilized in different roleplays at NID to develop systems, practices, culture, design milieu and synergies between the students and faculty members to work as co-learners and co-practitioners.

Among these significant roleplays, Ranjan as Chairman, Design Office managed the Institutes consultancy wing for over a decade from 1981-91 during which time he managed all professional assignments handled by the Institute’s faculty, over four hundred professional assignments in this period [3]. These efforts have been a major source of learning on matters of Design Management and in the management of creative tasks in later years at NID.

He was the first faculty member who initiated and implemented an active programme of authorship development(s) with editorial supports, book design and production infrastructure and an active marketing infrastructure for faculty and students between 1991- 1995 serving as Chairman, NID Publications [3].

For the year 1997, he was the officiating Director of the Indian Institute of Crafts and Design (IICD), Jaipur. In addition to his rich and grassroot level contributions for bamboo craft development initiatives and uplifting the trade and livelihood avenues for the bamboo craftsmen in India [12]; as an educator Ranjan’s experiments with his courses and the pedagogies discovered as part of out-of-box kind of courses, ‘Design Concepts and Concerns’ being the most popular among his courses; he could contribute to major curriculum development programmes in places other than NID as well [6], [13].

To highlight a few significant curriculum developments, he was actively involved for the same for educational programmes at the National Institute of Fashion Technology (NIFT), New Delhi and the setting up of the new Institute of Crafts (Design,Technology and Management) at Jaipur, India and in conceiving and setting up of the Bamboo & Cane Development Institute, Agartala [3].

He had been invited by a good number of top organizations, bodies and corporates to conduct sessions and workshops on – Design Thinking and Design Methodologies. A significant one from India being with the L’École de design Nantes Atlantique (India Studio) [14] and for icreate [15] in 2015.

His passion to document and share knowledge became a tool when he published a book along with his wife and fellow designer, Aditi Ranjan, Handmade in India [16]. The book is an official directory of all the crafts and was published by the Department of Handicrafts, Ministry of Textiles and the Government of India. It is one of his two best-known books, the other one being Bamboo and Cane Crafts of Northeast India (1986), a book analyzing the cultural and material potential of Bamboo [17].

He edited numerous volumes of NID publications including the “Young Designers” series and two CD-ROMs titled “Bamboo Boards and Beyond” (2001) and “Beyond Grassroots” (2003) which contain all his papers and reports on bamboo and on design [6].