Please focus on the black paddle and follow it downwards. Which path would it follow? Do you think it will follow the course of the red or the blue paddle? 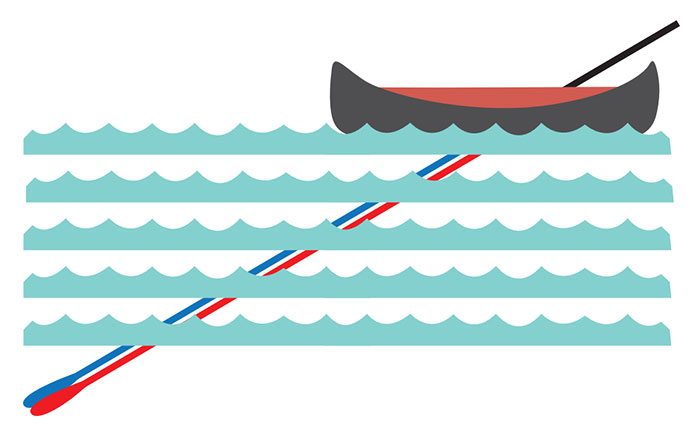 Although the black paddle appears to continue with the red paddle, it continues with the blue one. This is the Poggendorff illusion, where when the continuity of an obliquely oriented line is interrupted, the positions of the line segments on either side of the interruption appear to be shifted vertically or horizontally depending on the orientation of the interruption.

The Poggendorff illusion is a visual illusion in which narrow diagonal lines seem angled behind wider stripes. Let us take a look at the picture below. In the diagram to the far left, the thin lines appear misaligned, and there is a perception of offset when the same line continues. However, when the line is shifted up slightly (the image to the far right), there is a sense of continuation.

Why does this illusion occur?

While the real reason for the Poggendorff illusion is unknown, scientists have proposed a variety of possibilities, the two most prevalent of which are described below.

The first is based on the principle of angular displacement. According to the angular displacement theory, the brain overestimates all acute angles while underestimating all obtuse angles. The grey foreground rectangle that intersects the thin straight lines causes the visual system to exaggerate the orientation contrast between the lines and rectangle—that is, to 'expand' the acute angles at the relevant intersections. This, in turn, gives the illusion of a misalignment of lines. However, the illusion does not seem to sustain during a rotational change complicates the acute-angle expansion concept in the case of the Poggendorff Illusion.

Another explanation along the same lines would be lateral inhibition theory, leading the retina cells to behave differently at different angles when detecting contour orientation. As a result, the two lines' orientations would appear to be on different trajectories. However, the critics of this theory point out that the illusion is still intact when the middle bar is eliminated. The illusion does not appear to depend on lateral inhibition of the contour-orientation cells when no contour is present.

The depth-processing or consistency theory claims that the figure is processed as a three-dimensional entity rather than a two-dimensional figure. According to the hypothesis, the central rectangle is processed by the brain as a three-dimensional figure that appears on a plane directly in front of the observer, while the diagonal lines are interpreted as horizontal planes that recede away from the viewer. Obtuse angles are underestimated, and acute angles are overestimated, although for different reasons than the angular displacement theory. The effect is caused by a misconception of perspective representation rather than two-dimensional distortion.

Unfortunately, the depth processing theory fails to explain other variations of the Poggendorff illusion. When the Poggendorff figure is rotated, the diagonal intersecting lines are oriented vertically, reducing the illusion's impact, or disappearing the effect altogether.

How does the illusion change with angles? Here are a few explorations that examine how changing the orientation of the thin and thick lines changes the illusion's impact.

Situation 1: When the thin line is vertically fixed, and the thick bar rotates behind it.

Situation 2: When the thick bar is vertically fixed, and the thin bar rotates.

The illusion is extremely similar to that in the previous situation. The angles formed are relative in both circumstances.

Situation 3: When both the lines are thick, and one is rotated.

In this scenario, the illusion is more pronounced when the angle is more acute but less pronounced compared to the previous two scenarios where the lines were of different widths.

Does Poggendorff's illusion occur with curves?

Situation 1: When the thin line is vertically fixed, and the thick line is curved.

Regardless of the curve's amplitude, when the straight line was thin and the curve was thick, it severely diminished the illusion in situation one.

Situation 2: When the thick line is vertically fixed, and the thin line is curved.

The illusion got more prominent as the magnitude of the thin line increased in the following situation. The illusion occurs here as opposed to situation one due to the thick line's obscuring effect.

Situation 3: When both the straight and the curved lines are thick

The illusion exists here because of the obscuring, but the effect is slightly less than circumstance two.

The intersection of two straight strokes at an angle and the masking produced by the intersection are the two key reasons why the illusion appears prominently in the letter X.
Optical correction is applied in various ways to counterbalance the illusion depending on the type of font. With the help of several fonts, the same has been depicted below. The serif font is called 'Playfair Display,' the sans serif font is called 'Poppins,' the Italic fonts are also from the Poppins family, and the slab serif is named 'Trend Slab.' 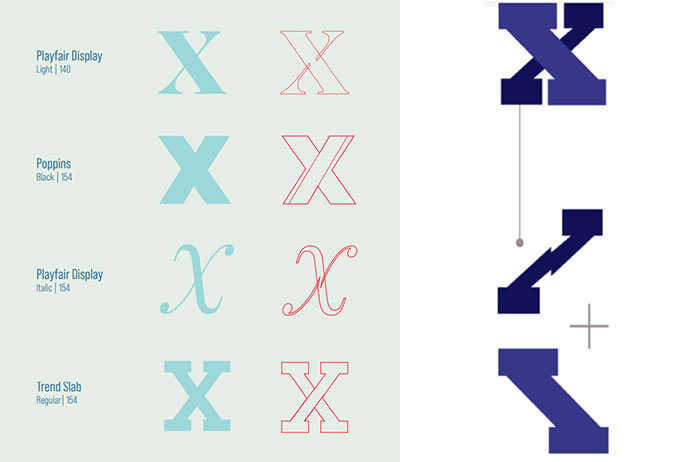 How does the weight of the font impact the illusion?

The examples above show that the illusion is apparent when a thin line crosses a thick line. However, when it appears in the letter' x,' the amount of illusion varies depending on the letter's weight.

The lighter weights lead to a diminished illusion, requiring minor corrections. However, as the weight increases, the illusion becomes more pronounced, necessitating a more significant change in the stroke to offset the illusion.

How does the width of the font impact the illusion?

Does the Poggendorff illusion persist in the Devanagari script as well?

Devanagari script is a combination of both straight and curved lines. And there is an exploration of the letter 'फ' done in the example below. The curved and straight lines appear to have the same thickness in the exhibited example since it is a nonlinear font. The effect is slight since the thicknesses are similar. The filled and outlined versions of the same letter are shown in the illustration. The filled curved stroke appears to be continuous, owing to the correction made by moving the right stroke slightly up, as shown in the outline version.

In Devanagari, some characters also display signs of illusion. However, unlike the original illusion, these are visible at the points where curved intersections are used. Some of the letters in 'Poppins' Devanagari are bolded to illustrate the examples better. The letter 'Tra' is written in the Nirmala UI typeface. 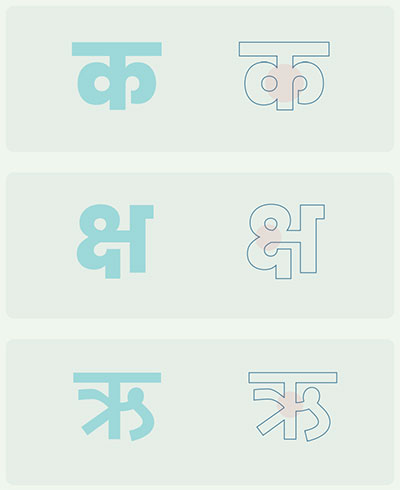 As previously noted, the illusion exists independently of the script. The illusion is also reflected in the Odia letters, especially those with sharp curves. The typeface 'Noto Sans Odia' illustrates some of these. 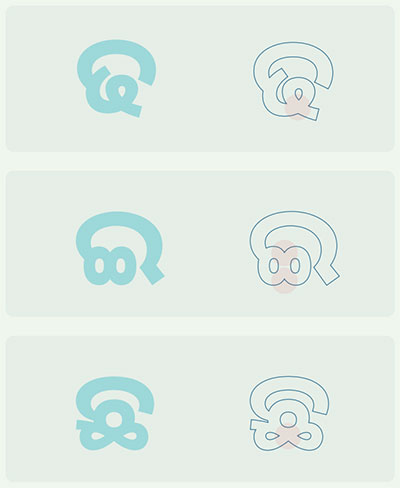