Do these lines look straight? Do the two lines look parallel to you? Like most people, you would say no. They are not parallel. However, look at Figure 3.2.8.b; these lines are parallel. This is the Zöllner illusion. It is a well-known optical illusion in which parallel lines appear distorted due to the pattern on them or around them. The original illusion constitutes a series of short vertical or diagonal lines intersecting several parallel lines. The parallel lines seem to converge or diverge from one another due to the intersection. The illusion was discovered in 1860 by Johann Karl Friedrich Zöllner. The Zöllner Illusion is one of many illusions in which a central feature of a basic line, such as the length, straightness, or parallelism of lines, looks warped as a result of other elements of the image, such as background or foreground lines, or other intersecting forms. 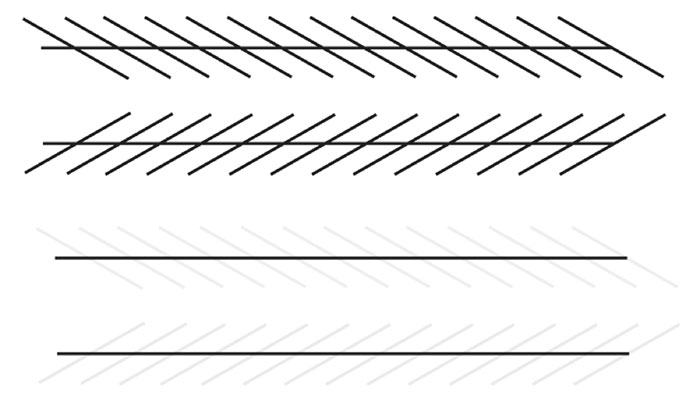 How does this illusion work?

Scientists still don't fully understand the specific mechanisms behind the Zöllner illusion, but it's plausible that the way the brain interprets angles and oblique lines may be the basis for this illusion. According to this notion, the brain overestimates acute angles while underestimating obtuse angles. The brain then changes the transverse lines' angles to give the appearance that the lengthier lines are slanted.

A variation of the Zöllner illusion in which the long lines are substituted with dots plotted along the same path, which reduces the illusory effect, as seen below, is one piece of evidence that might support the acute-angle expansion idea (the image is adapted from Westheimer, 2008) 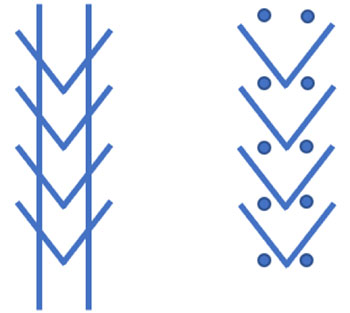 A sense of depth could also bring on the illusion. It may be due to the perception of the longer lines as being closer to the viewer than the other shorter lines, which the angle of the shorter line may bring on.

Here are some explorations of the Zöllner illusion. 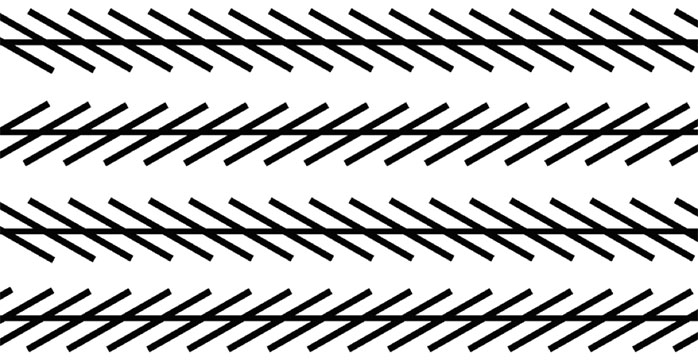 In Figure 4.8.d, we can see some cross-hatching enhancing the illusion. 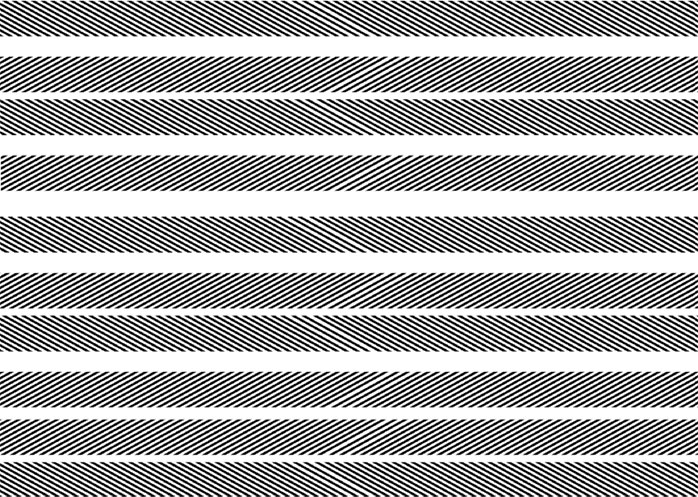 In Figure 4.8.e, we can see that the effect is strong as the white areas in the middle seems non-parallel to one another. 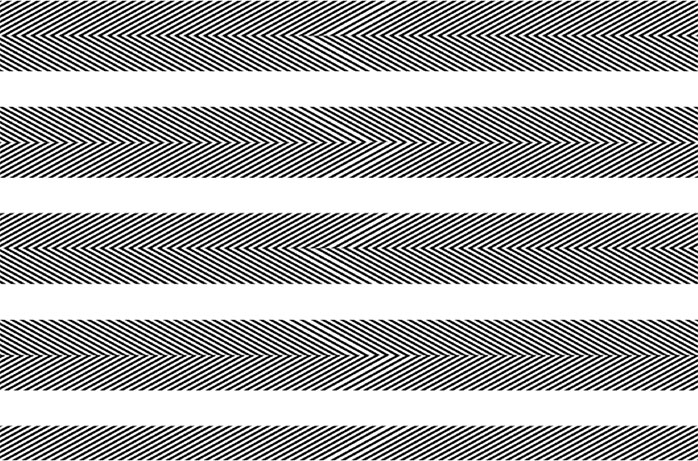 In Figure 4.8.f, the lines have been stacked together. As the distance between the stacks increase, the illusion gets stronger. As one can see, the strength of the illusion is not dependent on the longitudinal orientation of the stacks; rather, what enhances the illusion is that the stacks are oriented orthogonally.

Moreover, in the exploration above, the direction the lines point in makes a difference. The opposite-facing lines have a bulging effect, adding to the illusion. 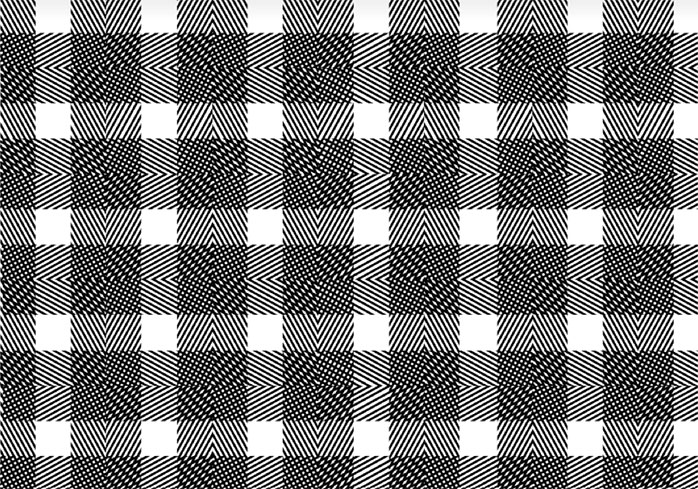 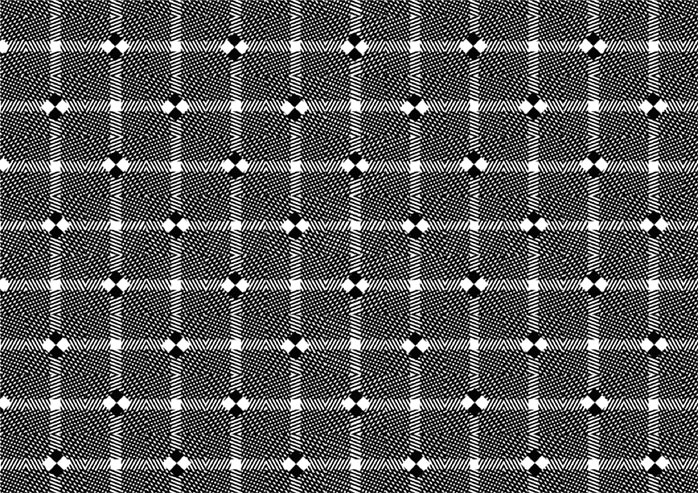 In Figure 4.8.h, focus on the diamond closer to the centre to see the big picture (inspired by the Hermann Grid/Scintillating Grid Illusion). The Zöllner "blocks" laid in the background affect the perception of the "straightness" of the white lines. Even though the white lines are straight and perpendicular, they cannot be perceived as such. The intricate grid and the diamonds between them intensify the illusion and confuse the eye. 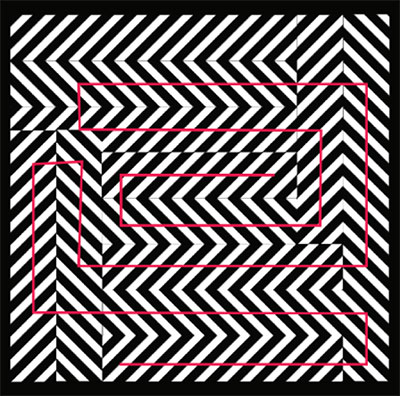 The combination of background herringbone pattern where it facilitates the acute angles expansion makes it have a distorted maze line which is, in reality, straight lines. One will be unable to perceive parallel lines accurately due to the interference of the background.

The following figures simultaneously explore elements of three illusions together. Specifically, they combine the features of Zöllner, Hering and Ouchi illusion. These include the angled orthogonal pattern in the background that distorts our perception of two parallel lines as non-parallel from the Zöllner illusion. The background plays a vital role in our perception of the triangle/square's features from the Hering illusion. Finally, from the Ouchi illusion, the triangle/square in the middle makes it seem like the illusion is moving.

The two explorations below (Figure 4.8.j, 4.8.k) are a clear depiction of the distortion of line characters due to the effect of underlying line or pattern characters.

In Figure 4.8.j, the square seems distorted due to the same angular expansion, and the play of colour adds more insight. Colours with more brightness and saturation may have a higher distortion value than the low bright colour tones.