What colour are these stars? 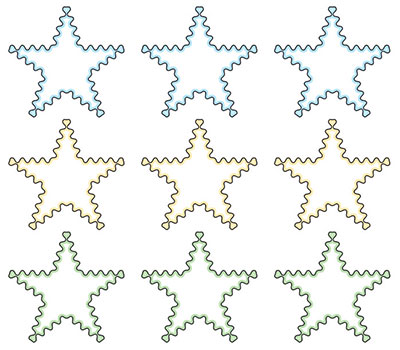 The first, second, and third rows of stars appear to be filled with blue, yellow, and green colours, respectively. But what if I told you that they are entirely white inside? That they only appear to be filled in with colour? This is known as the watercolour illusion. When a pale bright colour is placed on either side of a dark contour, the brighter colour expands into the surrounding white region, creating a watercolour effect.

Baingio Pinna first described this illusion in 1987. The watercolour illusion displays two main phenomena. The first is a distinct coloration effect, or a long-range assimilative spread of colour, which originates from a thin coloured outline that is juxtaposed to a darker coloured outline. Second, a potent figural effect, or figure-ground segregations, over a substantial area.

How does this illusion work?

Our mind considers the darker hue to be separating the figure from the background. The darker colour (black) is regarded as the border, and the lighter colour is perceived as the filling colour. Since the inner border is lighter in colour here, the colour appears to be spreading inwards. The lighter-coloured (blue, yellow, or green) line that surrounds the darker border and the actual colour of the figure (white) are both recognized as the filling. 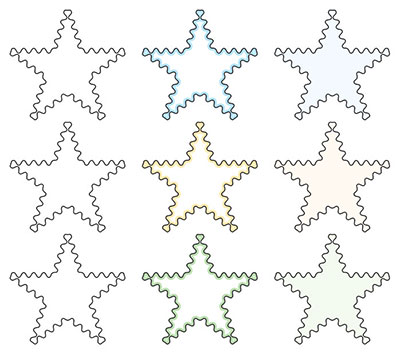 What enhances or diminishes the illusion?

What if one reversed the order and the black line was inside the shape and not outside? 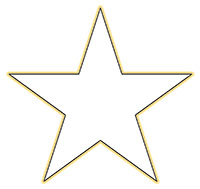 The watercolour effect is reversed when the black and yellow lines are switched. The yellow colour seems to be expanding at this point. However, this is not very effective.

The watercolour effect is enhanced by enclosing the same star in a black square with a yellow border surrounded inside, which also yields a "keyhole" effect. The hole appears to be three-dimensional, and the boundary defines a region. Now, the perception of figure and ground is flipped. The figure at the front is seen as a square with a star-shaped hole, while the background is considered as the area inside the star. A stronger keyhole can be seen as the yellow lines' brightness increases. 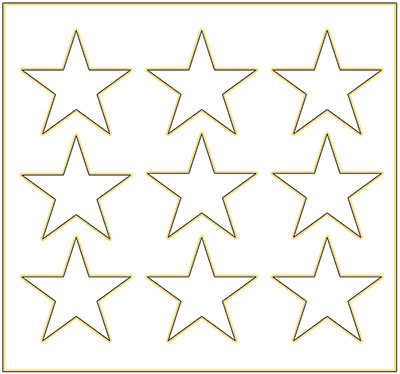 The watercolour effect persists even when there are several objects present. The area where the colour spreads is perceived as the figure. The pale-yellow square with several star-shaped holes is now considered the figure, with a white background. 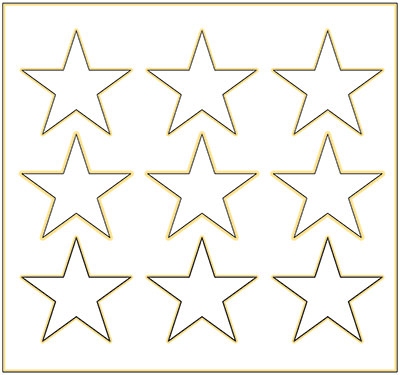 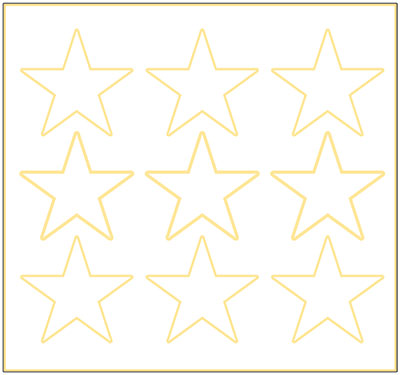 The watercolour and the keyhole appearance are eliminated when the black outline is removed. 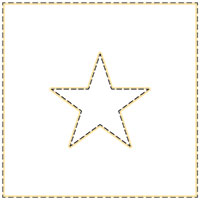 Even with dashed or dotted outlines, the watercolour effect still exists, though it is not as noticeable. 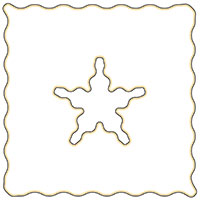 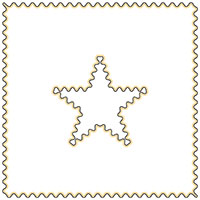 The watercolour effect gets more robust as the "waviness" increases. It appears that the spreading is nearly uniform. 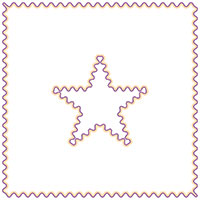 The colour spreading occurs in any combination of dark and light-coloured outlines.

But one might diminish the watercolour effect by using various shades of the same colour, which results in our brain trying to combine them into a single outline. The higher the contrast between two colours, the stronger the watercolour illusion.

The effect also appears on backdrops with various colours. Compared to the background, the line with higher contrast is seen as the border, whereas the line with lower contrast seems to spread in. However, the colour filling, in this case, is minimal. Therefore, it is best to have a white background.

What if there are two colours bordering a black outline? 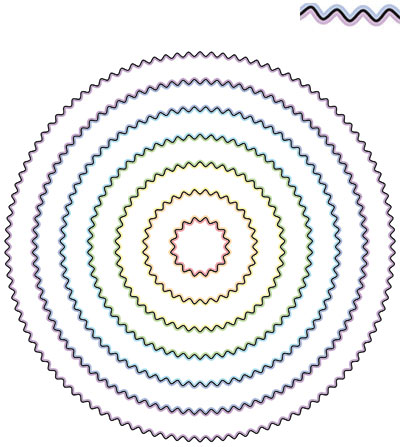 Here, the watercolour effect is faint due to the two contrasting colours surrounding the same black outline. 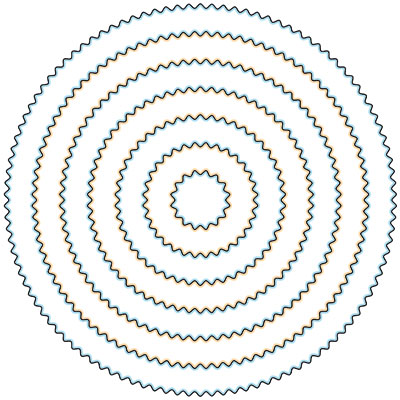 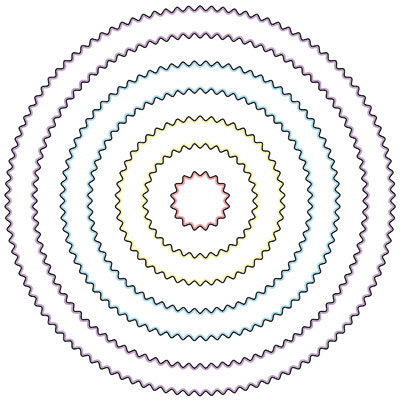 However, the best result is when only one colour is flanked against the black outline. 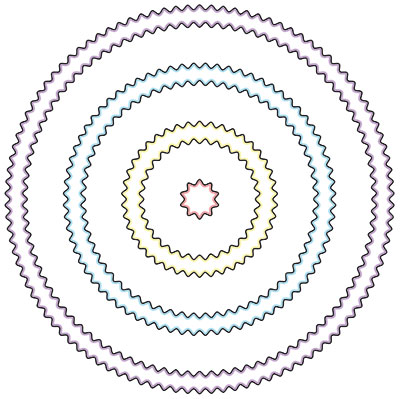 The watercolour effect is more pronounced when the lines of similar colours are placed in proximity. It is congruent with Gestalt's law of proximity. 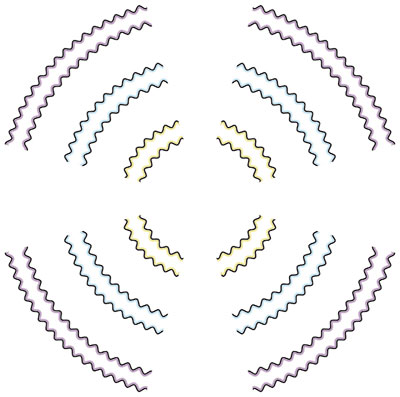 Albeit minimally, even if the outline is not a closed loop, the watercolour effect still persists. This is congruent with the Gestalt law of closure.

Can the effect take place with letterforms? 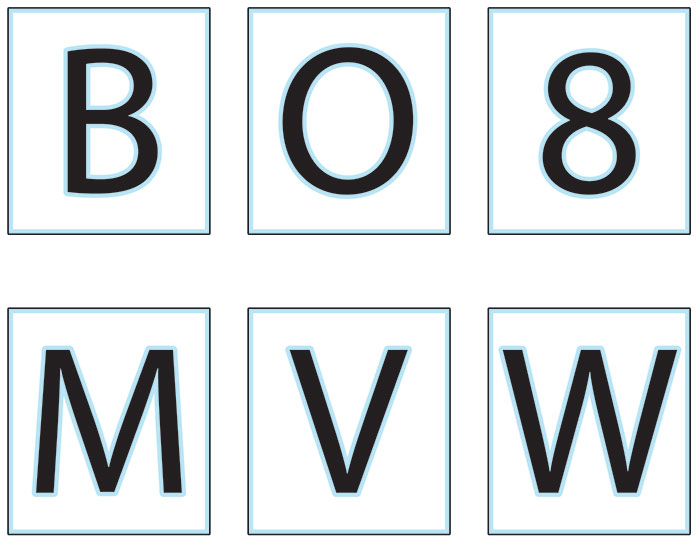 Whether or not they have closed counters, the letterforms inside the black borders with the blue lines flanking them also exhibit the watercolour effect.

The letterforms' outlines alone can produce a keyhole impression. In this instance, the figures are seen as rectangles with letter-shaped cuts in the front.

When the inner skirting of the blue line is removed from letterforms with closed counters, the keyhole effect results, however, in this case, letterforms and rectangles are considered figures and are seen as being in the front.

The letterforms' outlines alone can also produce a keyhole appearance. However, it's not entirely evident in this instance whether the letterforms are a part of the ground or figure.

The watercolour effect is also achieved by removing the blue line's outside flanks along with the rectangle, giving the letters the appearance of being completely covered in a light blue tint.

How can designers use the insights from the watercolour illusion?
Designers can use it in maps to make discretely coloured areas separating distinct locations. Posters and other print media can use them to create the illusion of an entirely colourful space with a minimal number of colours. It can also help be time efficient in digital rendering. By using fewer colours, it may be possible to reduce rendering time.

Here is the pdf exploring this phenomenon:
• Watercolour Illusion......