“Western Bengal daanger putul nach puppets are composed of a wooden body and face covered by a cloth soaked in dry clay that is then painted. The design of the features as well as the primary colors that are used recall the patas (drawings, scroll paintings) by street storytellers. The shining puppet’s face is varnished at least once a year. The wooden hands, pierced with a hole in the palm, can hold a bow, an arrow, a spear, or a sword. In the body of each puppet, several removable heads can be alternately inserted, allowing for a change of many characters. The left arm of the puppet is usually not articulated but the right arm has an elbow and sometimes a wrist. The dancing puppets are articulated at the hip and at both wrists. The character of Krishna (an avatar of god Vishnu) has a right leg whereas all other puppets do not”. 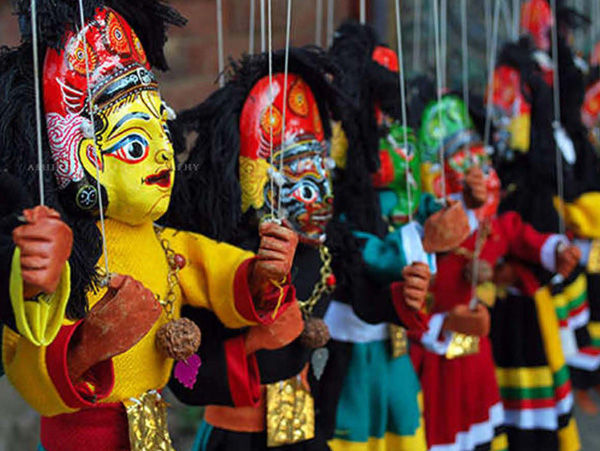 “Each ensemble is composed of twenty to twenty-five puppet bodies that can be multiplied by a factor of at least three, thanks to the interchangeable heads, to make up the total number of characters. Some of these heads can also represent animals, such as a lion or a monkey. The puppet, when its costume is fully spread out, can measure up to 1 meter high and weigh between 5 and 15 kilograms so that not even a strong man can hold and fully handle a figure of this weight. The stage, made of bamboo posts and fabric, can be as high as 3 meters, forcing the spectators to tilt their heads way back to look at the puppets. The stage, measuring 6.5 by 3.5 meters, is closed off on three sides and covered by a cloth roof. The painted backdrops represent a palace, a forest, or a cremation ground, and can be changed two or three times during a show”.