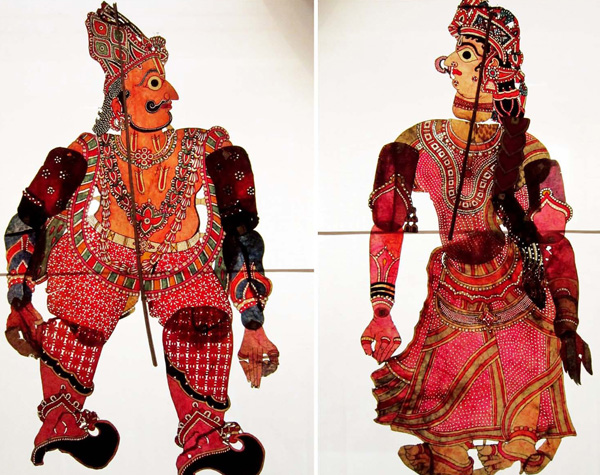 “Traditional shadow theatre from Karnataka in south-west India. Togalu signifies “leather” and gombeyata “figure, doll, dance, and performance”. There are two distinct types of togalu gombeyata based on the size of the figures. Chikka theatre uses smaller figures (between 20 to 30 centimeters high) and dodda theatre uses larger-sized figures (between 30 to 120 centimeters in height). Togalu gombeyata performances take place in a reserved space outside the village and also in the courtyard of certain temples. The colored and transparent shadow figures are seen from behind a rectangular white cotton fabric screen stretched between two poles.The lighting source – in olden days an oil lamp, later a hurricane lamp, and nowadays a neon – is placed between the puppeteer and the leather figures”.

“These puppet showmen travel about with their own portable puppet stage that can be disassembled and reset up consisting of twelve bamboo poles, a long rope, and a length of white cloth that can be mounted on three or four sides. There are often two puppeteers who set themselves up, to manipulate the shadow figures from inside this box, but without being seen by the audience. The musicians, composed of a singer, a maddalam (horizontal two-skinned drum) player, a tala (cymbal) player, and a harmonium player, sit or stand on the sides. They all wear gejje, metal anklet bells around their legs. The shadow figure is attached and held by a bamboo rod that runs through it vertically. Another much thinner bamboo rod manipulates the only movable member, most often an arm but sometimes the head or the leg. The large figures are animated by puppeteers behind the screen who hold them at arm’s length 1.8 meters high. In the past, figures used to be carved from doeskin but now goatskin is used. Performances are held during religious and secular celebrations in the Mysore, Mandya, and Bellary regions and a few other villages of Karnataka".