Did you ever get the chance to enjoy watching a 3D movie in the theatres? How do you think the movie experience is created? One of the most significant determining factors of the 3D movie experience is artificially created depth cues. Depth perception is the ability to see the world in three dimensions. It's a valuable innate skill as one would struggle to judge how far away items are without them. Designers and moviemakers often use depth cues, such as VR, to manipulate the viewing experience. There are numerous cues for sensing depth in the world. Some require only one eye (monocular cues), while others result from different visual patterns that occur when both eyes are utilized (binocular cues).

Monocular Cues
Artists have finely developed the depiction of depth in pictures. Often, they use “monocular cues” to create the appearance of depth in paintings and drawings. As a result, these are commonly referred to as pictorial depth cues. Below are some examples of these monocular cues.

Linear Perspective: This is the most common depth cue widely used in photographs and pictures. The tendency for parallel lines to converge on one another is known as linear perspective. For example, when staring down a straight highway, the two sides of the road appear to converge in the distance (as seen in the image below). It works in a picture because people assume that the converging lines, like in real life, suggest that the "endpoints" of the lines are far from where the individuals are viewing them. 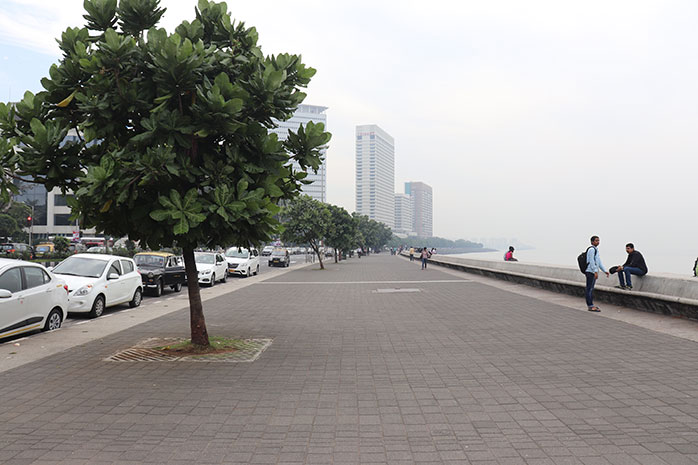 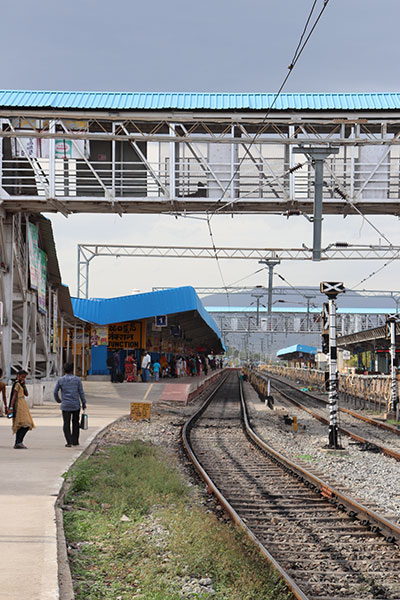 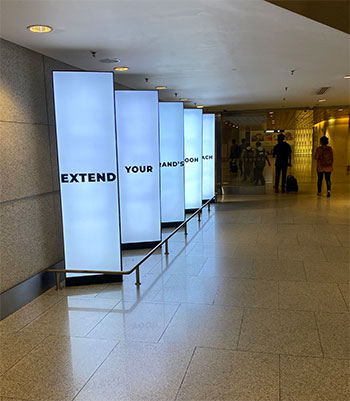 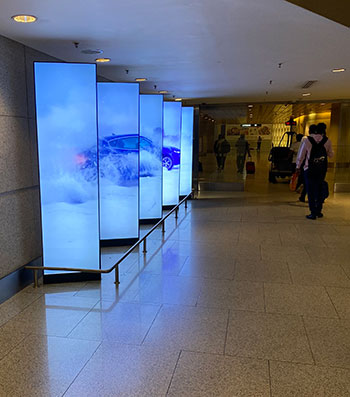 Relative Size: When going through photographs, you may subconsciously judge one entity in the picture to be bigger than the other. Relative size is used as a depth cue when items that people expect to be a specific size appear small and are therefore considered farther away. In other words, we subconsciously expect the smaller size entities to be in front whereas larger size entities to be further from us. Filmmakers use this approach to make their small models appear enormous from afar. In the image below, we make the judgment of how far away the sheep is based on the size of the sheep. The larger the sheep, the closer it appears to us or the camera. 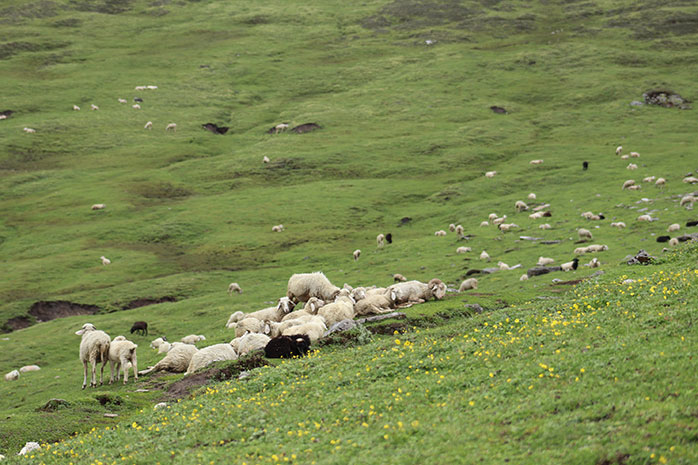 Interposition: People assume that if one object appears to be blocking another, the obstructed object is behind the first and hence further away in terms of distance. This is used as a cue by both photographers and moviemakers. Overlap is another name for this cue. For example, in the picture below, one will never assume the grass is closer to the camera than the tent blocking the view. 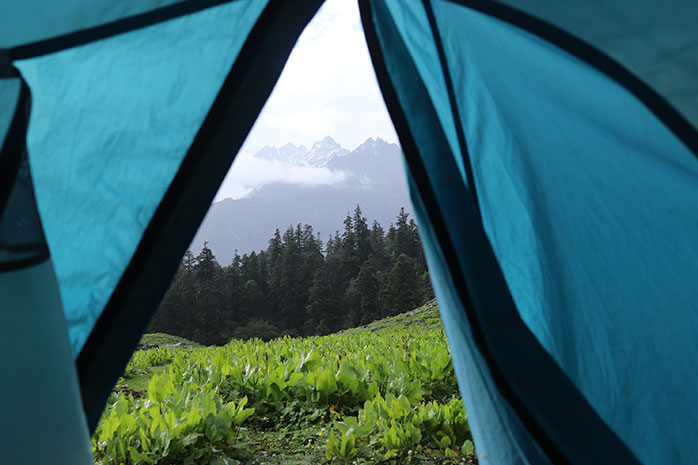 Aerial Perspective: Due to microscopic particles of dust, dirt, and other impurities in the air, the farther away an item is, the hazier it appears. This leads to a perceptual cue known as aerial (atmospheric) perspective. This is why far mountains appear fuzzier than nearby ones, and distant buildings appear blurrier than nearby ones. This cue is used quite often by artists in showing landscapes and hills. 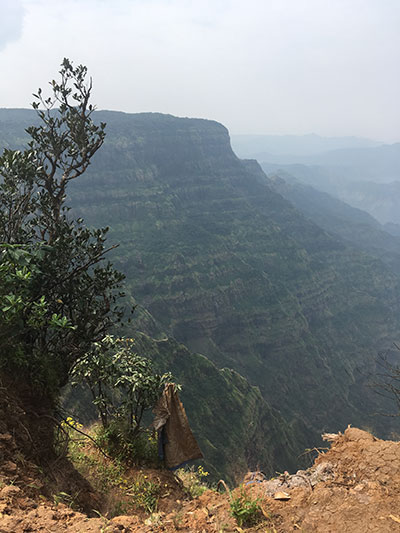 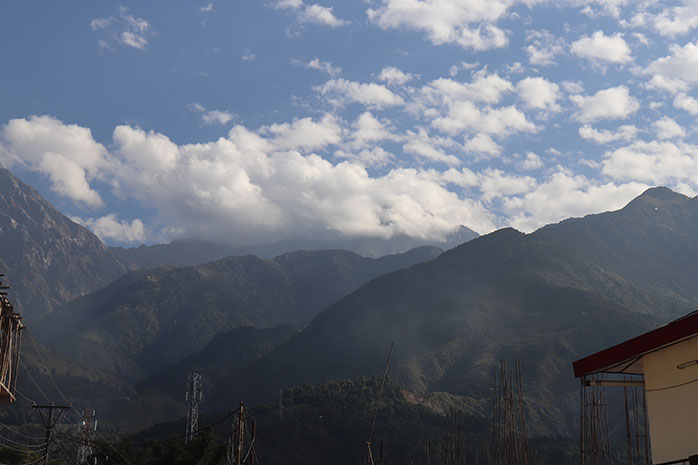 Texture Gradient: Look at any vast stretches of pebbles, rocks, or patterned roadways (such as a cobblestone street) nearby. The texture of the stones or bricks closest to you is quite apparent, but as you stare further away, the texture appears smaller and finer. Another technique artists employ to create depth in a painting is textural gradient. The texture explains how the gradient is laid out, making things appear far or near. It can be quite effectively used to create a semblance of distance and is used quite often by artists. 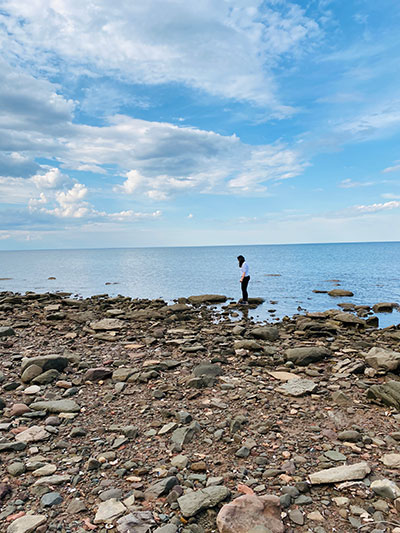 Motion Parallax: Finally, the motion also provides an insight into depth. When you're next in a car, note how objects in proximity to the car seem to move very quickly, while those in the distance, such as mountains, appear to move more slowly. Motion parallax is the difference in motion between near and distant objects. Motion is used quite effectively in old-style movies, especially in car sequences involving chase, where they would show people driving. In these sequences, you would see the car moving with the background screen where there is a projection of moving cityscapes.

Binocular cues.
Apart from the monocular cues, which could still work out in the case of one eye, binocular cues are possible only with two eyes.

Binocular Disparity: Binocular disparity describes how the eyes do not view the same image because they are a few inches apart. The brain perceives the image on the retina to determine distance from an individual. The object must be reasonably close if the two photos are that different. If they're almost similar, the object is far enough away for the retinal discrepancy to be negligible. Holding an object in front of your nose can help you display this cue. Close one eye and note the object's location, then open that eye and close the other. There should be a significant gap in viewpoints. When you perform the same thing with an object across the room, the image doesn't appear to "jump" or move as much, if at all.

The critical idea in binocular disparity is as follows. The difference in A is negligible since the item is far enough away. While the item is closer in B, the disparity between what each eye sees is higher. The brain interprets this difference as the object's distance.

In most cases, many size-distance and depth cues act together to provide a full-blown experience. In the examples below in this section, we explore examples dealing with perspective, size, depth, and distance.