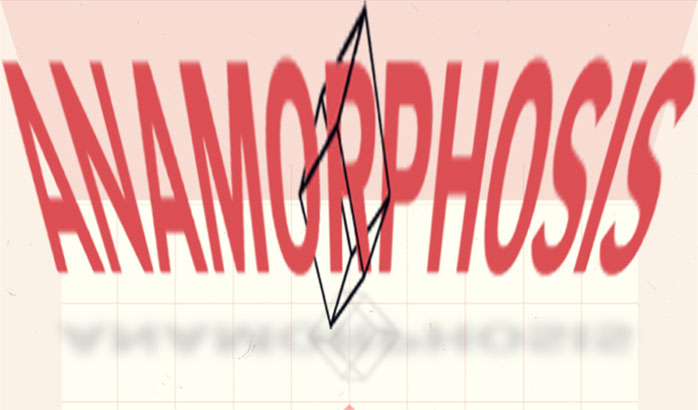 Anamorphosis is a distorted projection or perspective that requires the observer to stand at a precise location or employ special equipment to reconstruct the image. Anamorphosis originates from the Greek word Ana which means “back or again,” and Morph, which means “form or shape”; the term loosely translates to “formed again.” Two common types of anamorphosis are perspective (oblique) and mirror (catoptric) anamorphosis. Perspective anamorphosis dates to the early Renaissance (15th century), while mirror anamorphosis was prominent throughout the Baroque period in art (17th century).

The example above is of a perspective anamorphosis that requires proper positioning of the observer to gain the correct viewpoint to see the unformed version of the image. A conical or cylindrical mirror must be positioned over a drawing or painting on a planar surface to change a flat distorted image into a three-dimensional picture that individuals can view from various angles to produce a mirror-anamorphic image. The picture will appear undeformed when you look into the mirror at a unique angle.

Perspective forms of anamorphic images are typically ambiguous figures because while one can mislead individuals into perceiving the anamorphic images as 3D, they most often appear as distorted 2D images. The perspective forms must be seen from a particular angle for this illusion to work. The anamorphic illusion brilliantly displays the fact that the light that falls on our retina, and the following visual experience, can be created by different arrangements of objects and attributes in the environment around us. In the case of anamorphic pictures, we can see what appears to be a 3D picture (which the anamorphic image deceives us into thinking) and what is actually there at various moments (the 2D picture).

In the distorted version of the picture above, the word anamorphosis is distinct and identifiable when it is 2D. However, it is somewhat challenging to identify the cube-shaped around the “O” and “R.” The cube shape becomes undistorted when looked at from the correct viewpoint. This phenomenon can be explained by two theories: shape constancy and linear perspective. Our brains continually interpret and shape the raw visual data from our eyes. We prefer a well-ordered environment with recognizable forms and predictable patterns. According to the Gestalt school of psychology, one of the characteristics of human perception is that our brain prefers to organize visual elements in a regular, ordered, symmetrical and simple manner. As a result, we observe stable rectangular forms whenever possible, even if these forms are deformed most of the time due to perspective projection and are continually changing due to our movement. This idea is referred to as shape constancy.

To observe an anamorphic picture, one must first convert an oblique and non-uniform focus plane into a cohesive, 2D image, which can be aided by viewing it with one eye or half-closed eyes. This allows the picture to be separated from the screen or supporting surface, allowing the anamorphosis to re-form. Normal images are not warped when viewed from an oblique angle because human perception can immediately correct the distortion using the shape constancy principle. However, moving away from an anamorphic image’s correct viewpoint can swiftly diminish the illusion. 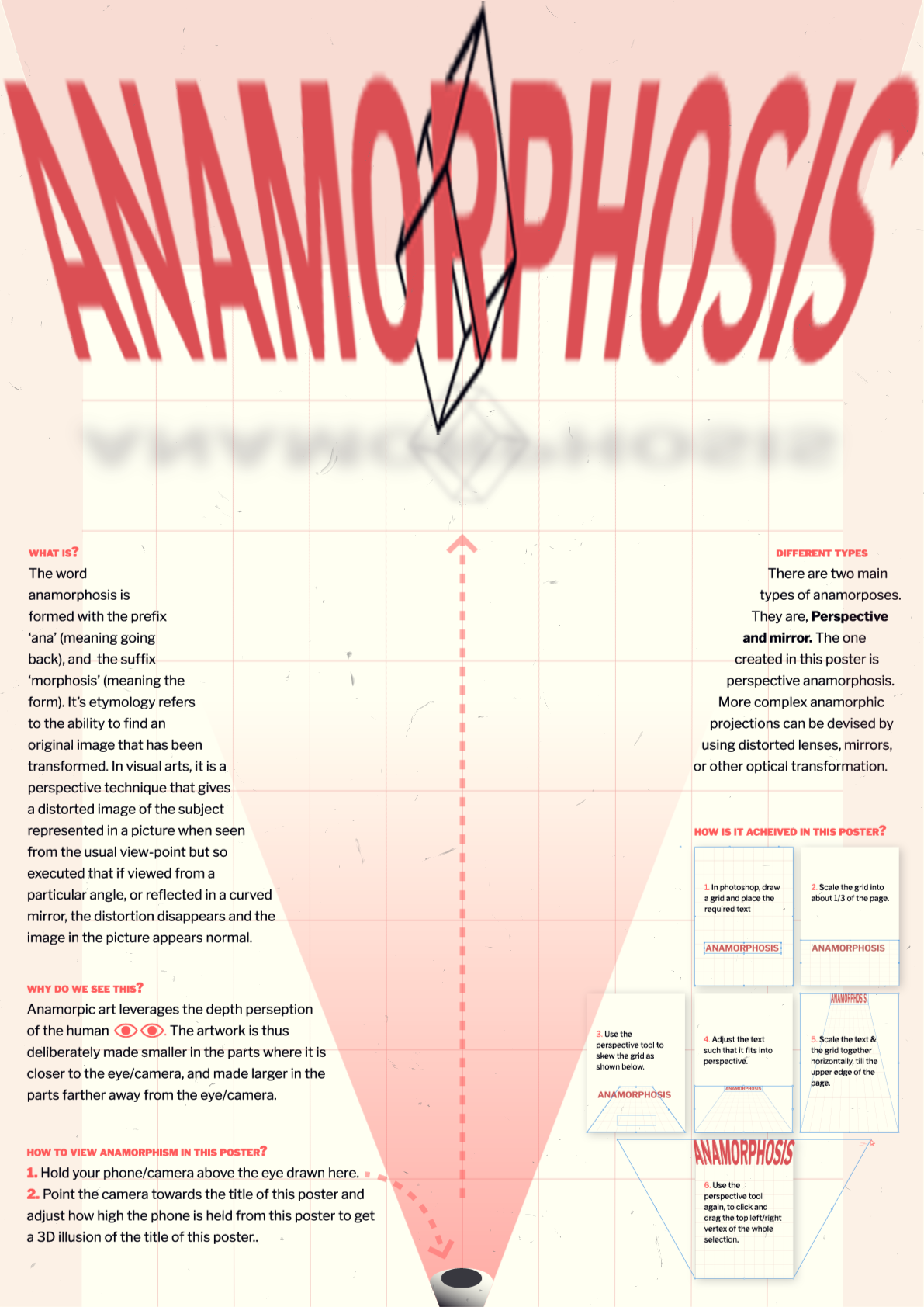 Moreover, according to the classical linear perspective, light travels in straight lines, and when light reflected from an item intersects a planar surface, it reflects an exact depiction of the original object. While humans commonly view pictures frontally from a narrow range of viewing angles, the observer of an anamorphic image must typically be at a radically oblique angle to the image plane (in this case: perpendicular to the eyesight) to observe the undistorted version of the anamorphic image. In such circumstances, the anamorphic picture seen from the front is often so distorted that it is unidentifiable. In other words, the anamorphic illusion uses the rules of linear perspective to create a two-dimensional image so distorted that it looks correct only when viewed from a particular angle or with a mirror that counters the distortion. Linear perspective, as a principle, states that the size of an object’s visual image is a function of its distance from the eye. As a result, as the distance between two things increases, they appear closer together, as seen in railroad tracks that seem to converge towards the vanishing point (the horizon). This monocular cue provides a sense of depth even when it does not exist. Therefore, anamorphosis is an example of how we rely on monocular cues such as linear perspective to see depth, even when depth is only imagined. 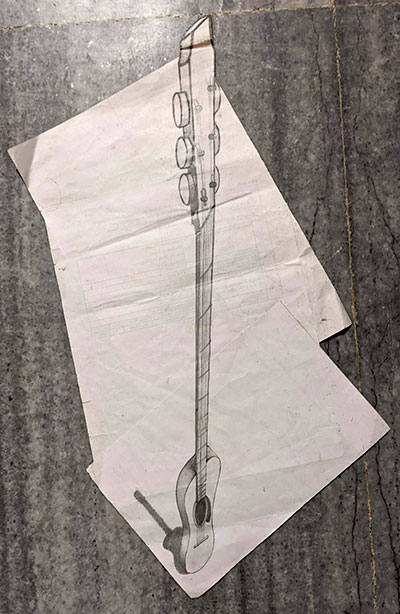 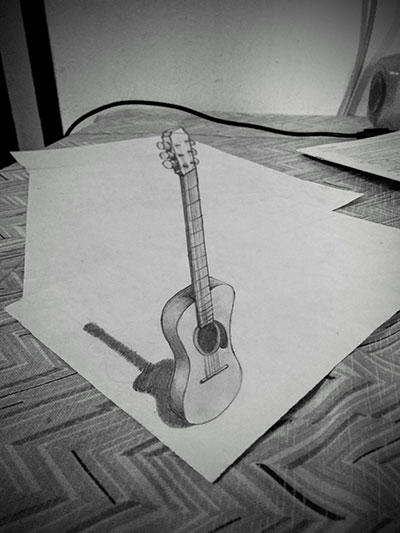 Here is another example of anamorphosis; the guitar looks distorted in the left image. However, when viewed from the correct vantage point, it looks 3D. So, where can we use anamorphosis? 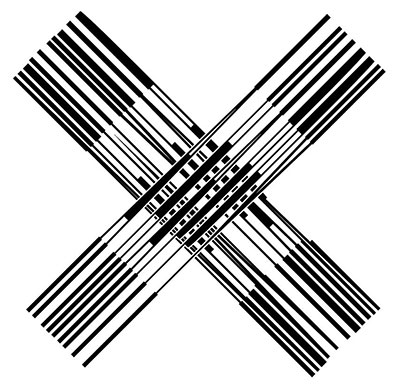 What about this distorted image above? Can you guess what is written on the page? If you cannot, then please see the video below.

While the art field is the most typical application of anamorphosis, it is far from the only one. Whether you travel to work or the supermarket, you’re likely to encounter an anamorphic illusion without realizing it. Road signs painted directly on the road are designed for the passengers in vehicles moving at greater speeds to see. These are achieved by stretching the letters or images to give them a more typical appearance while driving. Most people aren’t aware of this optical illusion unless they stop and look attentively. Anamorphic illusions are finding their way into the advertising industry as well.
Indian Language
English Bangali Gujarati Hindi
Kannada Malayalam Marathi Punjabi
Sindhi Tamil Telugu Urdu