Take a look at the video below:

In the picture above, we can see an identical-sized black and white bishop. However, when these two pieces are placed on the opposite sides of the same room, would you say they are of the same size?

Doesn't the white bishop look bigger than the black one? How is this possible? How does something of identical size look so drastically different? This is the magic of the Ames room. An Ames room is a distorted space that provides the optical illusion of relative sizes. Regular perspective is lost when looking at people or objects in an Ames room. The picture below displays what actually happens in the room. 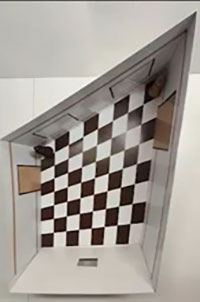 A chess piece standing in one corner appears to the viewer to be substantially larger than the piece located in the other corner due to the optical illusion produced by the warped environment. The room is actually trapezoidal; however, looking from a peephole, it looks like a rectangular room. The deception is strong enough to give the impression that a chess piece going back and forth from the left to the right corner is “growing” or “shrinking.”

The idea of the "Distorted Room" is not new. It has appeared in various entertainment toy rooms over the centuries. A Distorted Room was built in 1946 by ophthalmologist Adelbert Ames. Ames expanded on Helmholtz's idea by creating the room and conducting experiments in it, learning that fundamental rules of physics could appear to be broken in a Distorted Room. Distorted rooms were built before also in the past in various forms for entertainment. In our current times, it is also used in movies such as the Lord of the Rings to show tall characters (Gandalf the Grey) and extremely short characters (hobbits).

How exactly does the Ames room work?

An Ames room is designed with a rear wall, two parallel side walls, and a horizontally level floor and ceiling. From the front, the room looks to be an average rectangular room. This rectangular appearance is a perspective illusion. The room is trapezoidal because of the sloped walls, incline of the ceiling and floor, and proximity of the right corner to the observer in the front (or vice versa). To get the optimum perspective and eliminate any sense of depth, observers peer through a peephole into the room. Additional visual perspective cues, such as a checkered floor and "rectangular" windows on the wall, frequently augment the illusion. 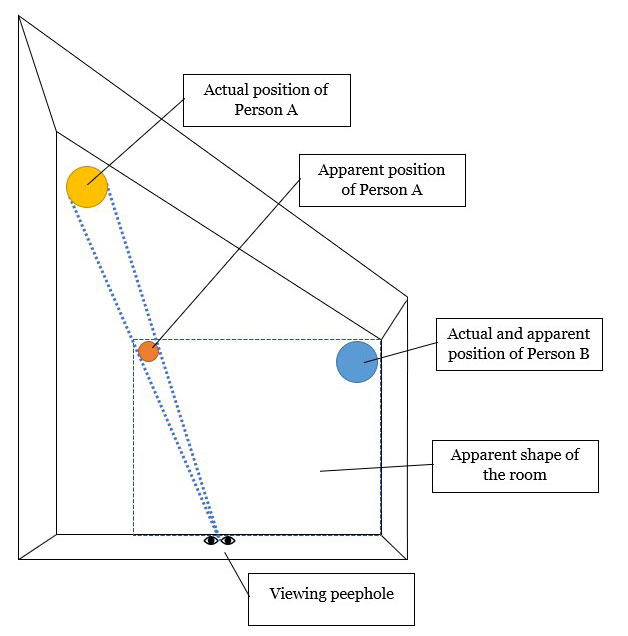 How would you construct an Ames room?

The steps below show how an Ames room is being constructed.  Notice the perspectival texture on the floor and the sides of the wall. This ensures that the size illusion is maintained. More full demonstrations of Ames room construction are created by various contributors and are listed at the end of this section. 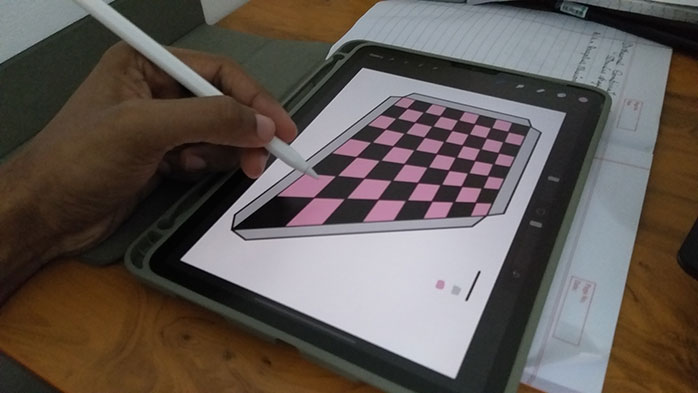 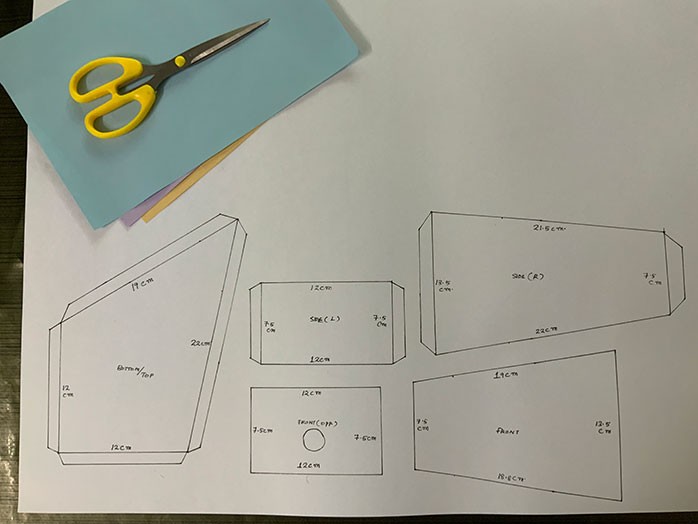 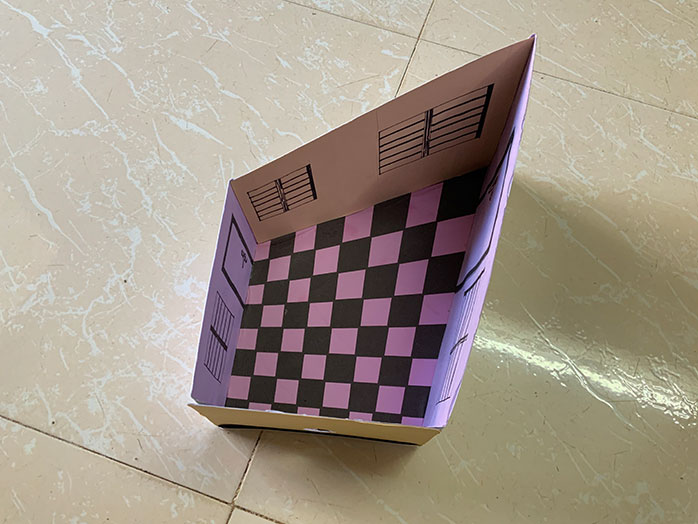 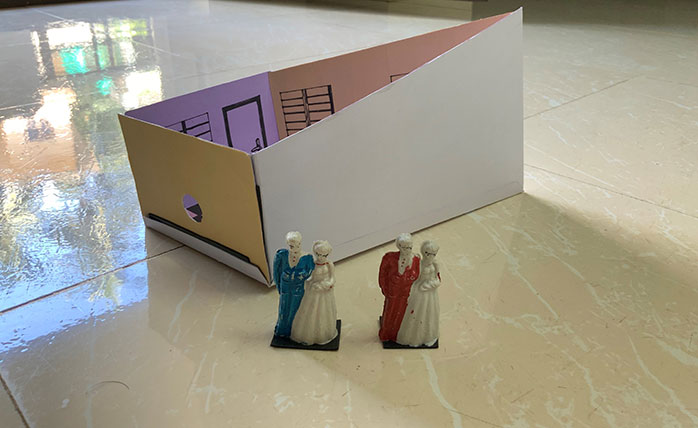 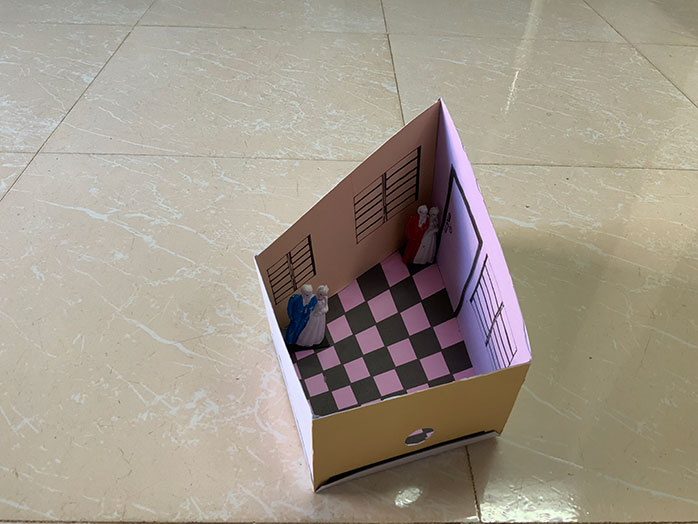 Figure 8.5.i
Source:Hirosh A C 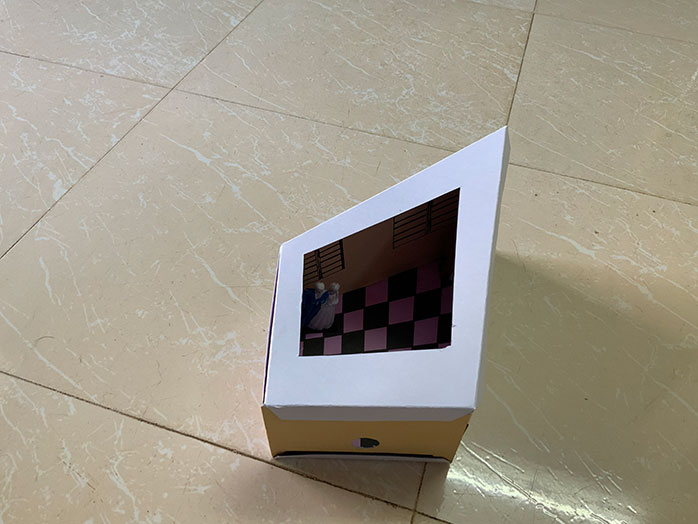 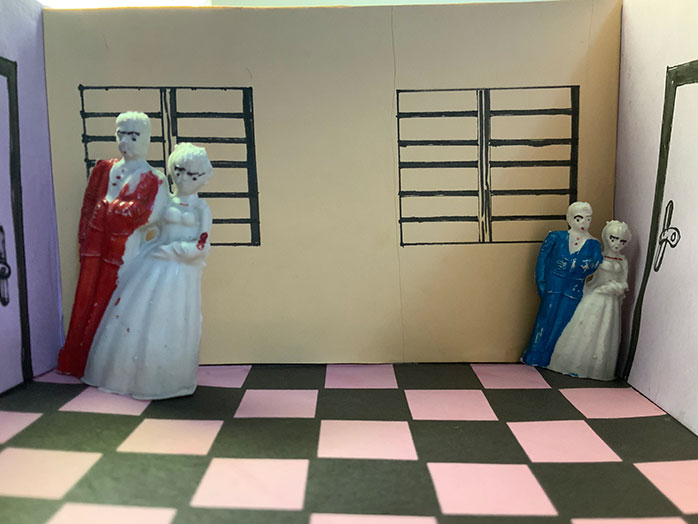 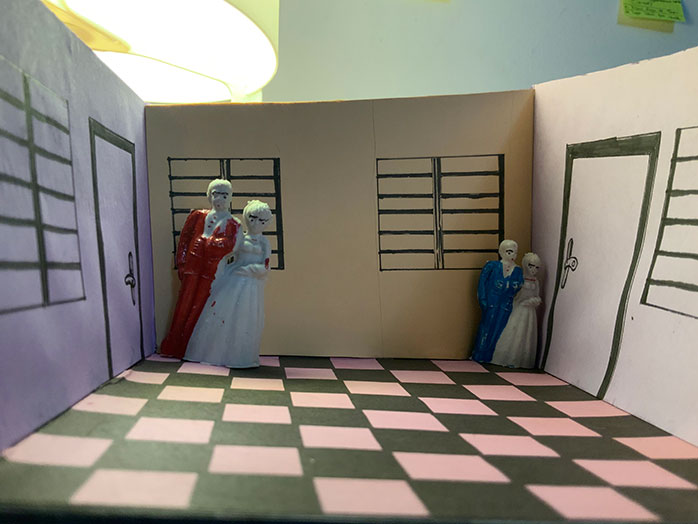 Our perception of when the room is empty as a regular is unsurprising because the image we view via the peephole is the same as what we would expect in a typical rectangular room. However, there is disagreement when people stand in the room.

Please look at the video demonstration below.

Here is an example of two identical figures being placed in an Ames room.

Due to the distance from the observer, the person standing in the farther corner appears smaller than the person in the nearer corner. The observers perceive the distortion in the sizes of objects/people but cannot perceive the room as trapezoidal. The room is still perceived as rectangular, which may be expected because onlookers are probably used to seeing rectangular rooms, not trapezoidal ones. In addition, several depth cues are contrived to recreate the illusions, and the walls may be painted in a certain manner to mask the fact that the room is long on one side. Further, the texture on the floor can also be devised to mask that the room is longer on one side.

A child in the closer corner will appear larger than an adult in the farther corner. Ames and other academics utilized this phenomenon to show how necessary experience is to perception. We tend to have the incorrect impression that the room is standard and that the occupants are all different sizes. Surprisingly, one can achieve the illusion of distorted size without an entire room; all that is needed is an apparent horizon against the right background. The eye then uses an object's perceived relative height above that horizon.

Several movies have used the Ames room, including Willy Wonka and the Chocolate Factory from 1971. To ensure that the hobbits' heights when standing close to Gandalf were accurate, The Lord of the Rings trilogy's production team used several Ames room sets in Shire scenes. In one episode of the 1960s television programme Voyage to the Bottom of the Sea, the producers used an Ames room to demonstrate a plot point in which two characters—one standing on either side of the room— went insane rather than simply declaring it.

Here are more creative demonstrations of the Ames room: