Follow the instructions below and then look at the picture. Focus on the eye icon and relax your eyes until you have double vision (the two icons will become four). Then pull back the vision so that the icons overlap, and you see three icons. Then focus on the brain icons, and you should be able to see the illusion. 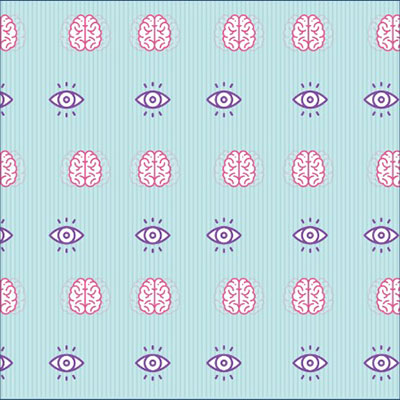 Does the brain icon seem to be floating? Do the icons appear bigger? This is known as the autostereogram.

Autostereograms create 3D perception from horizontally repeating patterns by slightly altering the distance between the repeating objects. Our pupils are about 60mm apart, meaning each eye gets a slightly different picture projected onto its retina. This is known as binocular disparity (described above in section 8.1). We do not have constant double vision from these two pictures because the brain immediately combines them into one. And in doing so, it uses the difference in the two pictures to add depth to our visual perception and help in our depth perception or stereopsis (3D vision).

Charles Wheatstone first described stereopsis in 1838. Wheatstone revealed stereopsis with a device known as a stereoscope that could display a slightly different image to each eye, simulating how each eye would take in a real-life 3D object but with flat images. Following this invention, David Brewster, a Scottish physicist, invented a handheld stereoscope which became quite a popular household item during Victorian times. In the 1960s, Bela Julesz created a computer-generated random-dot stereogram. These images could be seen using a stereoscope or by focusing on a point beyond the picture by 1980.

Christopher Tyler and Maureen Clark developed an algorithm that could embed more detailed depth images into a random dot autostereogram. The algorithms that produce these images work from a depth map. A depth map is a black and white image that tells the program to make the repetition interval shorter for the dots that make up the lighter and nearer parts of the picture. One can view these types of autostereograms without a stereoscope.

For example, if you view the stereogram below, it is created using a depth map, and you should be able to see a shark. 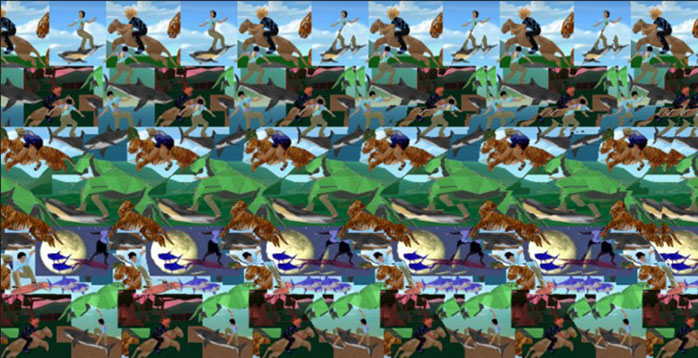 A depth map in 3D computer graphics and computer vision is an image or image channel that provides data on the distance between the surfaces of scene objects from the point of view.

For example, here is how the depth map for a stereogram of a wolf would look like 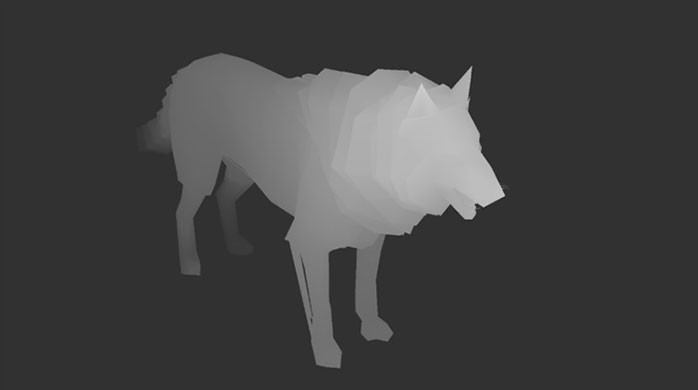 This is what the nearest light depth map would look like. 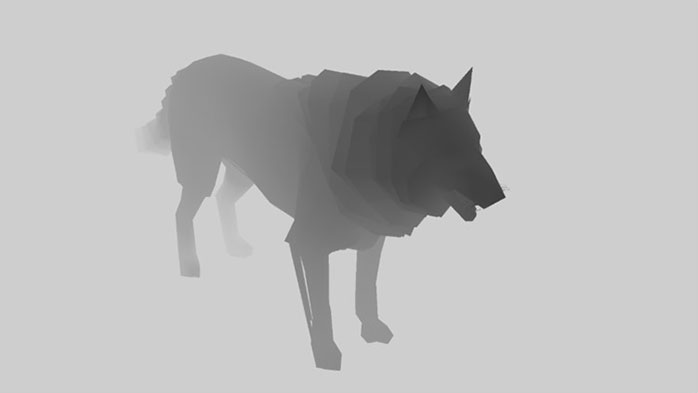 This is what the nearest dark depth map would look like. So, in an autostereogram containing the wolf, the nearest parts would repeat at shorter intervals than the more distant parts of the wolf. Except for the parts that make up the wolf, everything on the base image replicates at the same interval.

There are two methods to see a stereogram. The first one is the cross-eyed method (convergent viewing). In a cross-eyed stereogram, there is usually a reference point between the eyes and the stereogram that one must concentrate on to see. 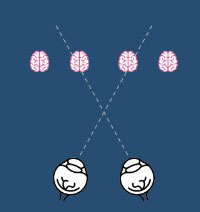 The wall-eyed method (divergent viewing) is the second way to view stereograms. This is the method used for the autostereogram in the picture above. In the wall-eyed method, the viewer will have to relax their eyes as though they are looking through the screen, and they should see the pattern as if it is floating and separate from the background. 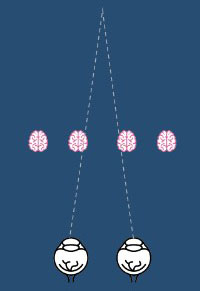 Traditional stereograms will have what looks to be a random pattern but with hidden images in them. However, the image above exemplifies a “wallpaper stereogram.” This type does not have a hidden image. Instead, it has repeating patterns that appear at different levels of depth when you diverge your eyes.

Traditional stereograms are designed to be viewed using the cross-eyed method, but the example above is for divergent viewing. This means that rather than having your eyes pointed at the image itself, you should over-diverge your eyes as if you are looking through the image at something beyond it. This is tricky because the lens in our eyes usually focuses on what our eyes are pointing at (object/image). However, for a divergent viewing stereogram, you need to try and focus on the image while pointing your eyes at a spot beyond it.

How does this work?

This diagram shows the view from above your head, and these dots represent icons on a simple autostereogram.

When you let your eyes diverge, instead of fixing them on one of these icons, each eye sees its own icon. Because your brain is used to turning two similar pictures into one – it assumes the two icons are actually one icon that’s further back and larger, rather than two that are closer. 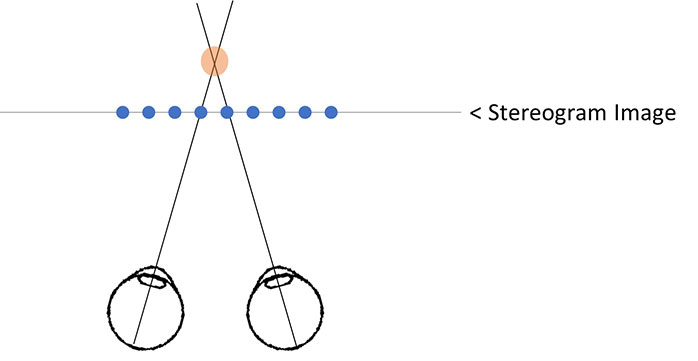 This illusion happens across the image, with every pair of repeated icons wrongly interpreted as one. The right-most and the left-most icons don’t have pairs on their other side, so you end up with seven – five illusory icons plus two edge ones. If there are pairs that are repeated at closer intervals, they would appear nearer to you. So, the interval of repetition can be manipulated to adjust depth. 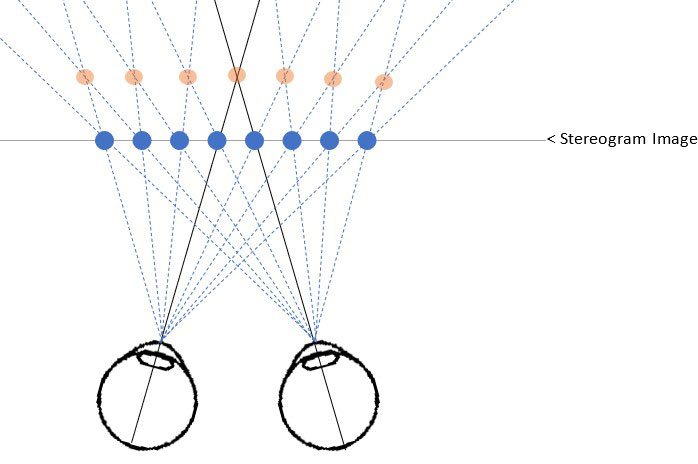 Where can autostereograms be used?

Artists can use them to create exciting artwork. For example, Salvador Dali created impressive stereograms in his explorations of optical illusions. The military used a stereoscope in World War Two to create 3D aerial photography and identify Nazi camps. Stereoscopy is the most widely accepted method for capturing and delivering 3D videos with the help of a 3D camera. The Mars exploration rovers launched by NASA to explore the surface of Mars are equipped with unique cameras that allow researchers to view stereoscopic images on the surface of mars.

​​​​​​​One can download a short depiction of the autostereogram here: